Table of contents:
A Brief History of Nagasaki
Best Things To Do In Nagasaki
How To Get There
Bonus Tips for Kyushu 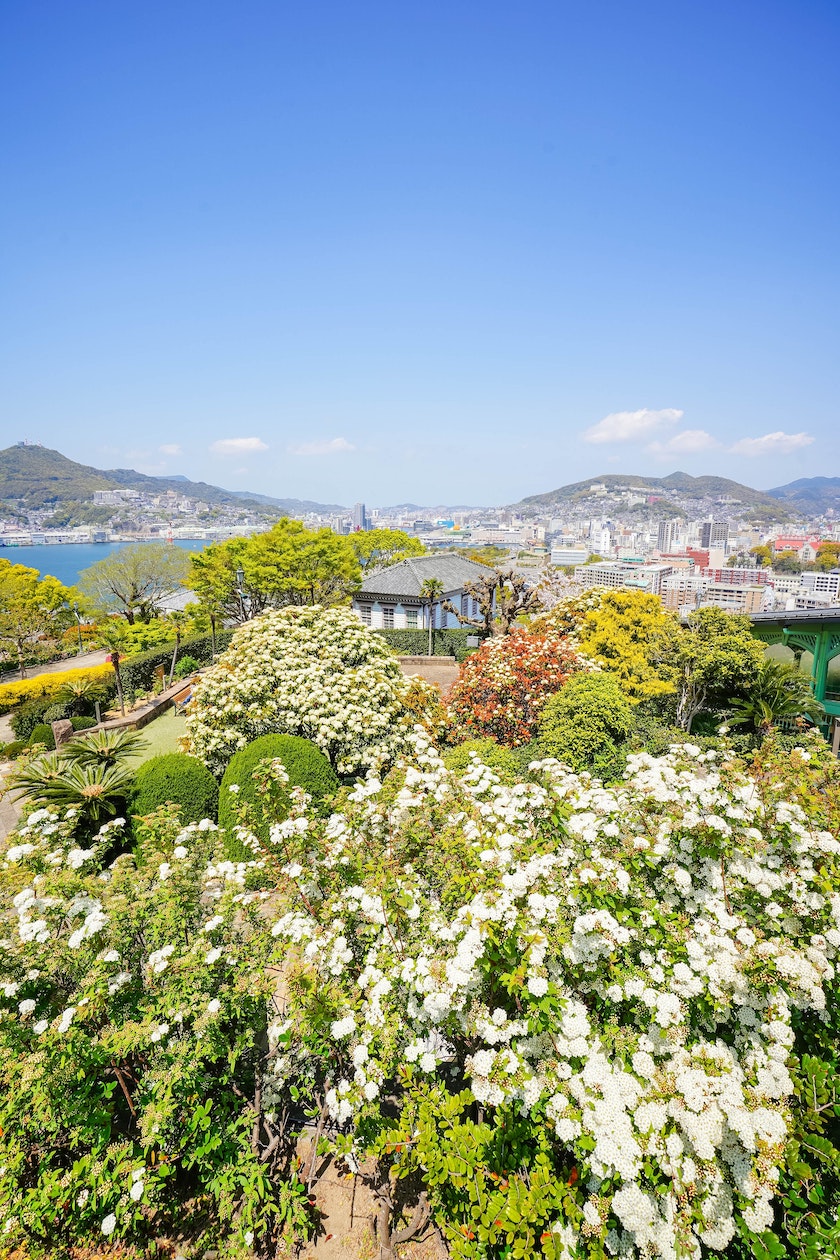 Nagasaki became world famous for the most tragic of reasons on 9 August 1945 when it became the target for the second atomic bomb to be dropped on Japan. In the aftermath of that destruction, Nagasaki rebuilt, its people slowly recovered, and the city returned to being the attractive, friendly, and cosmopolitan port it was before the Second World War. For centuries, Nagasaki welcomed international visitors and overseas communities as one of Japan’s busiest and most vibrant ports, even when the rest of the country was closed off to foreigners. This rich international history, with Dutch, Portuguese, English, Chinese, Russian and American influences, remains a key aspect of Nagasaki’s unique, multicultural identity today and one of the reasons why it’s so popular with overseas visitors and travellers and so different from other Japanese cities. In our guide to visiting Nagasaki, we’ll explore the city’s past and present, the best things to do in Nagasaki, how to get there with the JR Pass, and more. Together, we’ll discover there’s so much more to Nagasaki than its Second World War history. 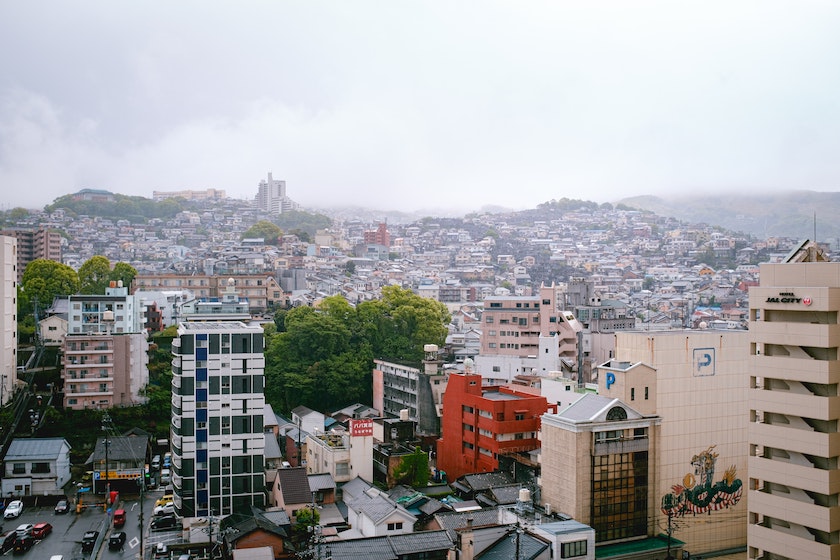 A Brief History of Nagasaki

Nagasaki has occupied an important international role in Japanese history for centuries, largely due to its close proximity to the Asian mainland. From as early as 1570, this port city was trading with Portuguese sailors, Chinese merchants, and Jesuit missionaries. In the 1600s, by order of the Shogun, only Chinese and Portuguese traders were permitted and the latter were restricted to a small area known as Dejima, which was built in 1639 and remains to this day. Dejima became the residence of Dutch traders who occupied this area for the next 200 years and brought European imports such as chocolate, coffee, as well as sports such as badminton and billiards. Even during Japan’s self-imposed period of isolation during the Edo Period (1603-1868), Nagasaki remained an international trading outpost, which has contributed to the city’s cosmopolitan character, welcoming atmosphere, and diverse culture, architecture, and cuisine. By 1858, Nagasaki was open for general trade which brought further influences from Britain, America, and other nations. In the early 20th Century, Nagasaki’s port location saw it become a key naval base for Japan, which eventually led to it being targeted by the US military on that fateful day in 1945. Since then, Nagasaki has rebuilt and recovered. Today, it remains a uniquely international city and surprisingly different to other urban centres in Japan – instead of subways, it has San Francisco style electric trams, the city’s architecture bears more European influences, and the cuisine is just as diverse and multicultural. Nagasaki is picturesque and attractive, with tall hills and a long, narrow harbour, and has retained the welcoming atmosphere and international flavour that made it such a popular and important destination for overseas visitors for hundreds of years. 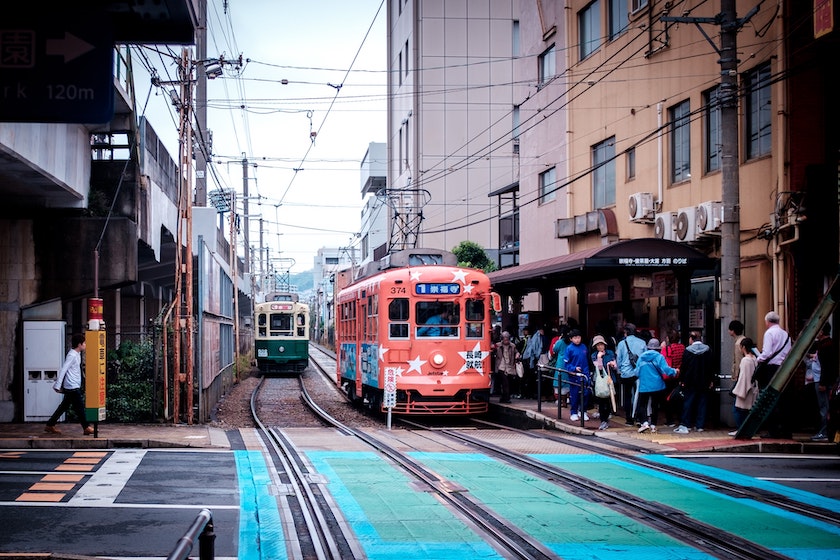 Best Things To Do In Nagasaki

Nagasaki is a pretty port city with plentiful attractions and a rich trading history, which gives the area a uniquely cosmopolitan feel, reflected in the European influenced architecture, transport, and cuisine, as well as its welcoming and easy-going atmosphere. As a port city in the south of Japan, Nagasaki is also blessed with pleasant weather throughout most of the year, meaning there’s no bad time to visit. The city is, of course, world-famous for the events of 9 August 1945 and has done its part to ensure this tragedy is never forgotten with a number of monuments and museums. If you’re interested in the history of the Second World War, or you just appreciate and understand the value of learning from the past, then these memorials are humbling and important places to visit and experience while visiting Nagasaki. Of course, as we’ve explained, there’s much more to Nagasaki than its bombing in the Second World War. Here are our top recommendations: 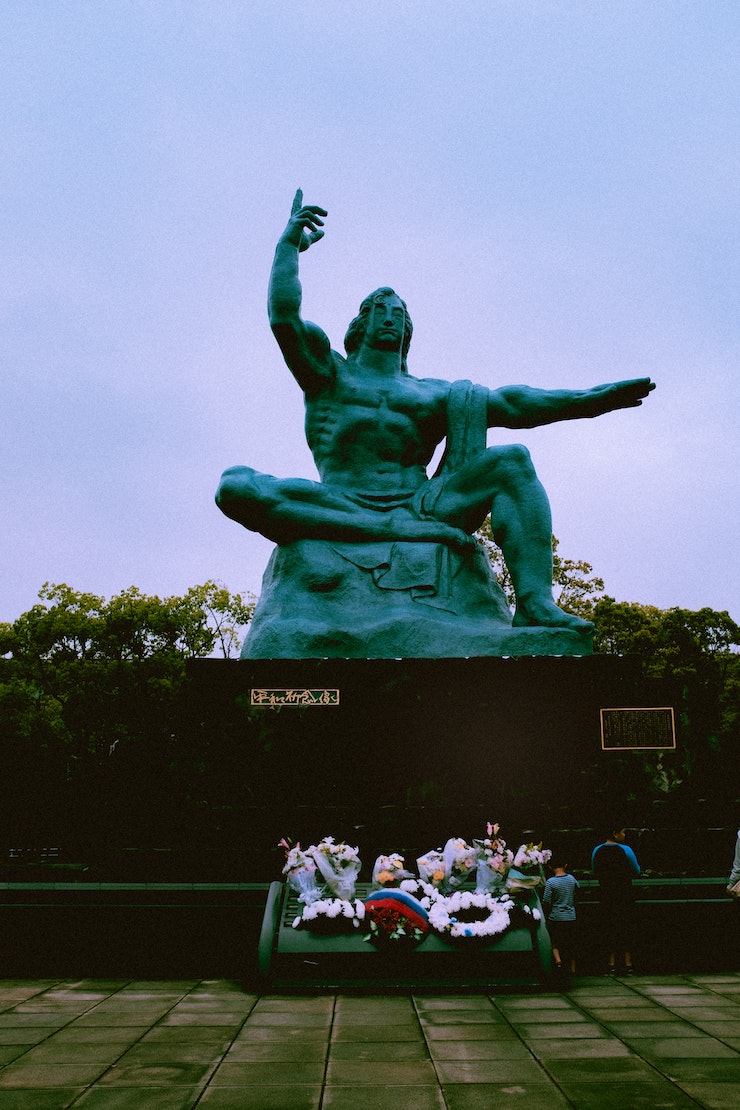 Nagasaki Peace Park and Nagasaki Atomic Bomb Museum
While Nagasaki has many varied attractions, it’s important to remember the events of 1945 and their impact on the city. Peace Park is famous for its 10-tonne statue (pictured above) which was designed by Kitamura Seibo in 1955. Alongside this, there is a dove-shaped Fountain of Peace and at the Atomic Bomb Hypocentre Park there is a smooth black stone which marks the very point where the bomb exploded. These visual memorials are accompanied by the Nagasaki Atomic Bomb Museum’s moving and sombre exhibition of photographs, first-hand accounts, and artefacts relating to the bombing, which instantly killed 40,000 people and was responsible for the deaths of tens of thousands more over the years before Nagasaki was rebuilt. Next to the museum, you also find the Nagasaki National Peace Memorial Hall, which was completed in 2003. For a more general history of Nagasaki as a region, the city’s Museum of History is also very interesting and comprehensive.

Mount Inasa
Also known as Inasayama, Mt. Inasa is a 333 metre mountain overlooking Nagasaki with a ropeway and gondola to carry you to its peak. From there, you’ll find an observation deck with 360degree views on the city and harbour. You can even ascend at night for a particularly spectacular view. This is considered to be one of the three best night views in all of Japan.

Nagasaki Temples and Shrines
While Nagasaki is famous for its international influences, it is also rich with traditional Japanese culture and heritage, including several notable temples and shrines. One of the most picturesque is Suwa-Jinja – a huge Shinto shrine located on a forested hilltop that can only be reached by climbing 200 steps. This shrine is also the main location for the Kunchi Matsuri festival which sees Chinese dragons parade around the city. Meanwhile, for Buddhist temples, Sofuku-ji, built in 1629 by a Chinese monk, is notable for its red Ming-dynasty era architecture and entrance gate. You can also find out more about Nagasaki’s brush with Christianity and the tragic fate of its Franciscan missionaries by visiting The Twenty-Six Martyrs Museum, on Nishizaka Hill. For more on Japan’s Shinto and Buddhist beliefs read our Spiritual Guide to Japan.

Dejima
An artificial, man island where Dutch traders were permitted to live in Nagasaki during Japan’s period of isolation, Dejima still exists today and remains a fascinating snapshot of historical life and European style architecture within Japan. There are seventeen buildings in total and all have been painstakingly restored. Walking tours are provided and definitely worth it for a trip back in time. Look out for the Oranje Festival every April too.

Nagasaki Beer Train
Yes, you heard that right. A beer train! It’s more or less exactly as it sounds too. This streetcar has been transformed into a bar on wheels (or tracks to be more precise) and offers unlimited drinks and snacks during a 90-minute round-trip through Nagasaki from Shokakuji-shita Station. 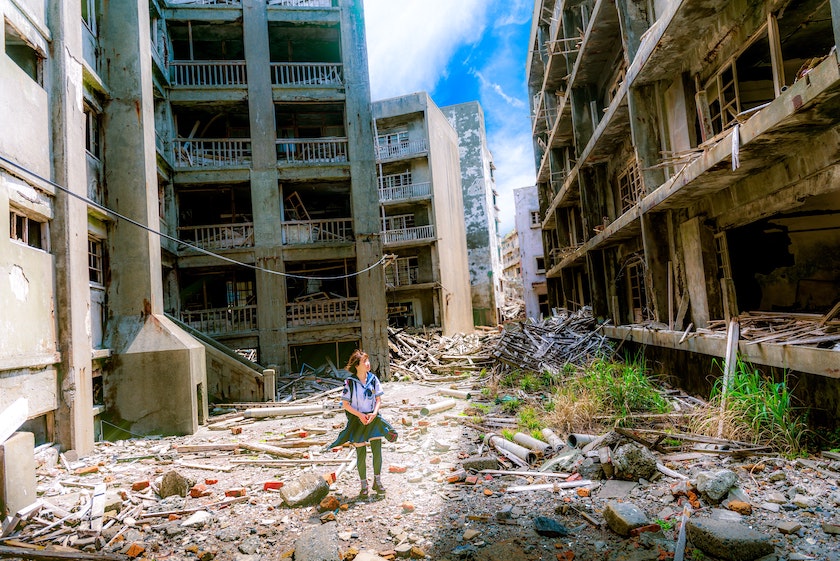 Gunkan-jima (Battleship Island)
While it’s official name is Hashima, this island off the coast of Nagasaki has become known as Gunkan-jima or Battleship Island. A former mining colony dating back to 1870, Hachima was the location of Japan’s first ever concrete skyscrapers, which alongside the high concrete sea walls gives the whole island the look of an enormous grey battleship. When the coal industry declined in the 1970s, the island was abandoned and it became a ghost ship. Today, it exists as a unique and popular tourist attraction and UNESCO World Heritage site that feels as close as you can get to wandering around a post-apocalyptic cityscape. Film lovers might also recognise Gunkan-Jima as the site of Javier Bardem’s hideout in Skyfall starring Daniel Craig as James Bond. For more locations across Japan seen in Hollywood movies read our guide to Japan on Film.

Drinks at Shianbashi
Like Tokyo’s Golden Gai or Osaka’s Dotonbori, Nagasaki has its own late-night labyrinth of bars, restaurants and parlours called Shianbashi. It’s the perfect place for some Nagasaki bar-hopping.

Shippoku Ryori
This unique Nagasaki cuisine is a fusion of the city’s multicultural influences with elements of Japanese, Chinese, Dutch, Portuguese and more. Shippoku Ryori includes a number of dishes such as hikado (based on a Portuguese soup), Buta Kakuni (braised pork), Nanbanzuke (marinated in vinegar), and more. One of the best places to try this cuisine is the historic Shiseki Ryotei Kagetsu restaurant which has been open since the 1600s. For more on Japanese cuisines, read our Beginners Guide to Japanese Food and Regional Specialities.

Nagasaki’s Chinatown
It might seem strange, but thanks to centuries of trading with Chinese merchants, Nagasaki has one of Japan’s oldest and most authentic Chinatown districts and it’s well worth a visit. It is a particularly lively place to visit during Chinese New Year, which sees the Nagasaki Lantern Festival. Chinatown is home to another of Nagasaki’s culinary specialties too – champon (a noodle and pepper soup). You’ll find Nagasaki’s Chinatown a few minutes’ walk from Shinchi Chinatown tram stop.

Glover Garden
A beautifully-landscaped garden and open air museum, Glover Garden was the historical home of a Scottish merchant called Thomas Blake Glover who settled in Nagasaki. Glover’s house, at the centre of the gardens, is the oldest surviving Wester-style residence in Japan. With views over Nagasaki harbour, this serene and tranquil attraction is a popular destination all year round. Bonus fact: Puccini’s world-famous opera, Madame Butterfly, is set in Nagasaki and may have been inspired by Thomas Blake Glover. That’s just one of many stories about the play’s real-life origin of course.

How To Get To Nagasaki

Nagasaki is on the southern island of Kyushu in Japan. You can reach Nagasaki from both Tokyo and Kyoto with the JRailPass by using the JR Tokaido/Sanyo Shinkansen to Hakata Station in Fukuoka. From Osaka, take the JR Sanyo Shinkansen. Once at Hakata Station, transfer to JR Kamome Limited Express.

As we mentioned above, Nagasaki is located in Kyushu, one of Japan’s main islands. We often recommend the southern island of Kyushu to travellers looking to explore off the beaten path because it is home to all sorts of secret places international travellers have never heard of, such as Kumamoto and Kagoshima. The Kyushu region includes its namesake island and the Ryukyu Islands, including Okinawa, which some consider Japan’s fifth main island. Fukuoka is the largest city in the southernmost part of Japan. Kyushu features a subtropical climate and a busy agricultural industry. Okinawa is a major beach destination, and the capital city of Naha has historic sites, including the ancient Shuri Castle. Fukuoka is home to the Fukuoka Castle, which also houses a park and an art museum. With a Japan Rail Pass, you can see Nagasaki and take in a number of other See below for our bonus tips for visitors to the Kyushu region. 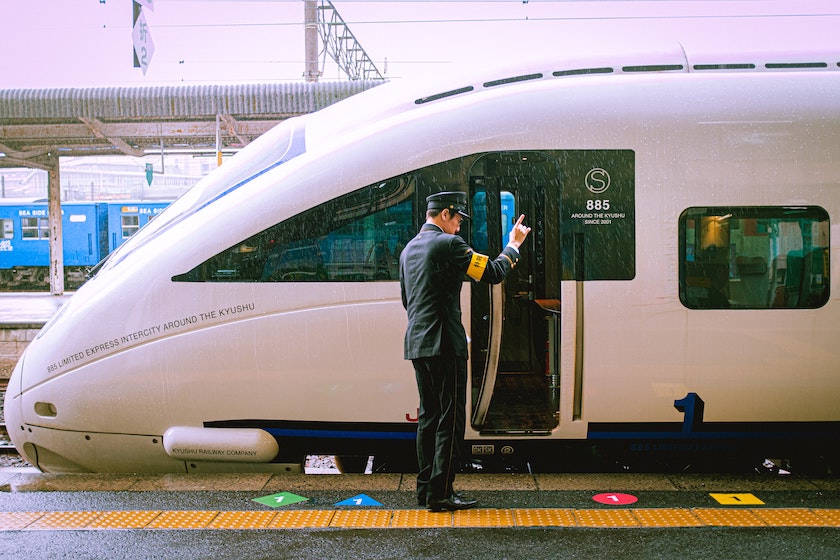 The Toreiyu Tsubasa is a Joyful train by JR East. The Toreiyu is special for its tatami mat seating, locally brewed Sake, and relaxing hot foot baths.

Pontocho (先斗町) in Kyoto is the birthplace of Kabuki and the small alleyways have a lively and beautiful ambience, especially after dark.