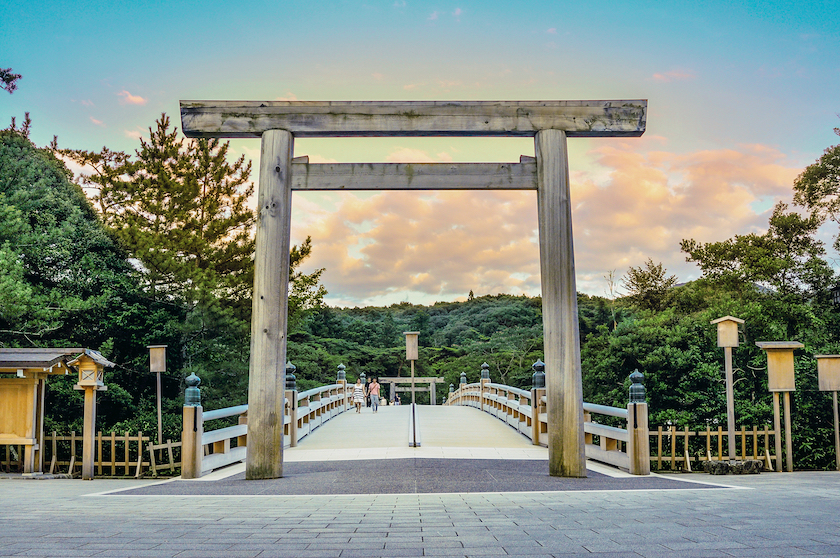 Known as the spiritual home of the Japanese people, Ise Grand Shrine (or Ise Jingu) dates back almost 2,000 years and remains the most important and culturally significant shrine in all of Japan. If you’re fascinated by Japan’s spiritual history and the beauty of its shrines and temples, then Ise Grand Shrine should be at the very top of your list. The shrine is the home of the sun goddess Amaterasu, Japan’s supreme deity, and the location of the Sacred Mirror of the Emperor. One of the most fascinating facts about Ise Grand Shrine is that every 20 years, the inner and outer shrines as well as the Uji Bridge, are taken down and completely rebuilt in keeping with Shinto beliefs of rebirth and renewal. Ise Grand Shrine is not just spiritually and culturally important to Japan, it is also one of the most beautiful shrines you could ever hope to visit. In our comprehensive guide, we’ll tell you everything you need to know about Ise Grand Shrine, how to get there with the JR Pass, things to do while you’re there, and advice on exploring the surrounding Mie Prefecture. We will begin in the 3rd Century…

The history of Ise Grand Shrine is intertwined with Japan’s spiritual, cultural, and mythological history and is documented in the Nihon Shoki (The Chronicles of Japan), which is the second-oldest book of classical Japanese history. It began almost 2,000 years ago when the 11th Emperor of Japan, Emperor Suinin, asked his daughter and princess to find a permanent place of worship for the sun goddess Amaterasu and the sacred mirror, which was gifted to Japan’s first emperor by the goddess even further back in ancient history. You can find out more about this legend and many others in our guide to the Folktales of Japan. Entrusted with her mission by the 11th Emperor, the princess Yama Hime-no-mikoto, travelled across Japan for more than 20 years in search of the right location until she had an epiphany from Amaterasu herself directing her to Ise City in Mie Prefecture. Princess Yama Hime-no-mikoto heard Amaterasu’s voice tell her that ‘Ise is a secluded and pleasant land. In this land I wish to dwell.’ To mark the spot, the princess set up 50 bells to let everyone know the location was enshrined for Amaterasu, which is why the river Isuzu is known as ‘fifty bells’ to this day. The shrine built at this location in Ise became known as the Inner Shrine (Naiku) and was followed by an Outer Shrine (Geku) that was constructed six kilometres away around five centuries later. Together, Naiku and Geku form Ise Grand Shrine, also known as Ise Jingu. After it was enshrined, pilgrimages to the Ise Jingu became so popular, particularly during the Edo period, that the number of visitors rose each year from thousands to hundreds of thousands and into the millions by 1830.

Today, Ise Grand Shrine actually encompasses a complex of 125 shrines across Ise City, but the Inner and Outer Shrines are the most sacred sites, particularly Naiku, which is where the sacred mirror, or ‘Yata no kagami’, is securely stored. This object is considered one of the three Imperial regalia. One of the most interesting and unique facts about Ise Grand Shrine is the fact that the inner and outer shrine and Uji Bridge over the Isuzu river are rebuilt every 20 years. This is done to represent the Shinto understanding of death and renewal, the impermanence of all things, and to ensure building techniques and knowledge is passed from one generation to the next. The shrines are all built in a special variant of the ‘Yuitsu-shinmei-zukuri’ architectural style which is known for its simplicity and antiquity and may not be used in any other shrine. The buildings also use wooden dowels and interlocking joints rather than nails. The wood from the previous dismantled shrine buildings is recycled to make a new Torii gate at the shrine’s entrance and is also sent for use in shrines across Japan. The current Ise Grand Shrine buildings were constructed in 2013 and will be rebuilt again in 2033. 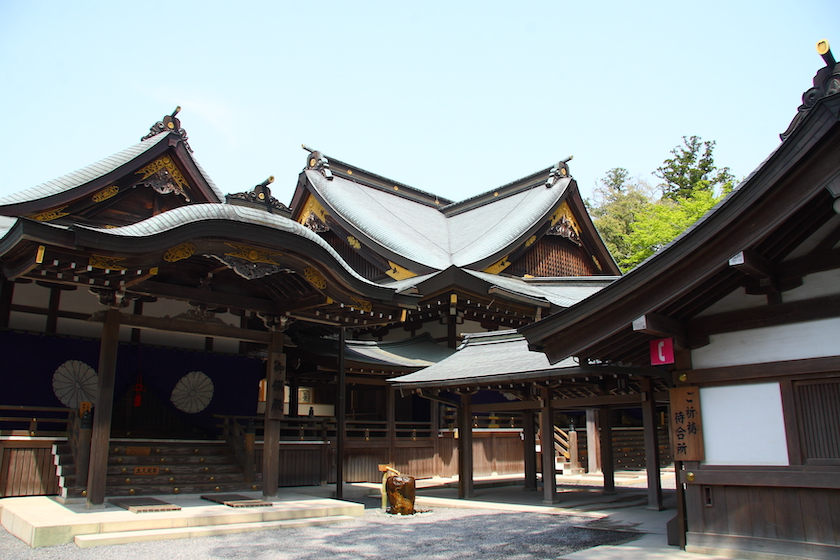 Ise Grand Shrine is known as Ise Jingu because ‘Jingu’ is the highest classification of Shinto shrines. Shinto is one of the two main spiritual belief systems in Japan, the other being Buddhism. As a basic rule, shrines like Ise Grand Shrine are related to Shinto, while temples belong to Buddhism. You can find out much more about both belief systems in our Spiritual Guide to Japan. Unlike Buddhism, Shinto originated in Japan and is deeply woven into the fabric of Japanese culture and history. The Shinto religion involves the worship of multiple gods or spirits known as kami, who are said to inhabit all things. Purity is the big focus of Shinto and there are different rituals that involve the cleansing of worshippers. Since Shinto has evolved organically and has no single origin or sacred text, practices vary depending on the kami and the region of Japan in which they take place. It’s worth noting that there are different types of Shinto shrines across Japan. Some are shrines to kami that represent war like in the case of Hachiman shrines or rice as represented by Inari shrines. Sengen shrines, instead, are dedicated to the spirit of Mt Fuji, while there are also ones founded to honour the heads of important Japanese clans. Another difference comes from who builds the shrine, whether it be Imperial shrines created by governments of the past or local shrines built by a local community. For more information on shrines and our top five list (which includes Ise Grand Shrine) read our guide to Five Important Shrines To Visit in Japan.

Naiku – the inner shrine – is held in the highest reverence of all the shrines because it is home to the sacred mirror and enshrines Amaterasu. Naiku consists of multiple shrines and buildings, but the main shrine said to hold the mirror is called Kotai Jingu and photographs of this structure are forbidden. Many of the shrines and holy buildings are built from Japanese cypress trees and surrounded by gravel paths, ancient forests, and mountains, but the holy inner sanctum is concealed by high wooden walls and can only be accessed by members of the Imperial family and senior shrine priests. This doesn’t prevent visitors from appreciating the beauty and wonder of its exterior and the surrounding area however. You can also approach the fence to offer prayers. It is a truly breath-taking place to visit and is steeped in history and spirituality. Another highlight is the main Torii gate leading to the beautiful 100-metre long Uji Bridge which stretches over the Isuzu ‘fifty bells’ river. Like the shrines, this stunning wooden bridge is dismantled and rebuilt every 20 years. Geku – the outer shrine – is located around six kilometres from Naiku and is another serenely beautiful place to visit, overlooked by forests and mountains. It is dedicated to Toyouke-Omikami, the god of agriculture, rice harvest and industry. While you can walk between the inner and outer shrines in about an hour, there are also regular buses that run between both sites and guided tours.

How To Get to Ise Grand Shrine

Ise Grand Shrine is easily accessible from across Japan using the JRailPass. From either Tokyo, Kyoto, or Osaka take the JR Tokaido Shinkansen bullet train to Nagoya and transfer at Iseshi Station. From Nagoya you can take a JR train or Kintetsu train to Ise City. Japan’s excellent domestic rail network is simply the best, most cost-effective way to explore the country and the Japan Rail Pass is your gateway to this unforgettable country and its superior transport. Find out more in Is The Japan Rail Pass Worth It? for a comprehensive overview of the reasons why it is so useful and read our Visitors Guide to Japan’s Railways and Trains for why they’re the best way to travel. 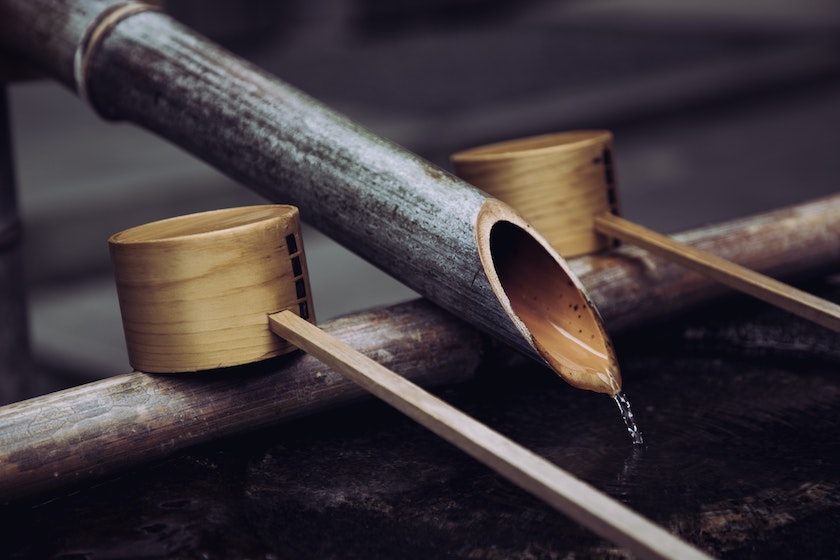 Bowing before you pass through the torii gate at the entrance and under the gate either side of the centre.
Outside the shrine you’ll find a basin of water for washing your hands, which is done by filling the ladle and washing each hand, starting with your left.
Some shrines have a bell hanging over a donation box, which you may ring before donating to the shrine.

For more general advice on customs and traditions in Japan, read our Guide to Japanese Etiquette: Rules Every Visitor Should Know.

Special Festivities at Ise Grand Shrine
As Japan’s most sacred Shinto shrine, Ise Grand Shrine is host to a large number of festivals, celebrations and other festivities across the year. Several of the festivals are related to Amaterasu and also to the harvest. In February each year for example, Kinen-sai sees visitors come to Ise Grand Shrine to pray for a bountiful harvest. October sees the shrine’s most important festival – Kannamesai. This celebration is dedicated to both Amaterasu and the harvest as Jingu priests thank the sun goddess for the first rice of the season. There are also a series of more than 30 rituals, events, and celebrations to mark the 20-year rebuilding of Ise Jingu. This is called Shikinen Sengu and takes eight years to complete.

Japan loves its festivals, known as ‘Matsuri’, and many of them are directly associated with the country’s shrines and temples. It wouldn’t be a trip to Japan without experiencing a traditional festival and there are thousands to choose from. Take your pick in our guide to the Top 12 Festivals in Japan. 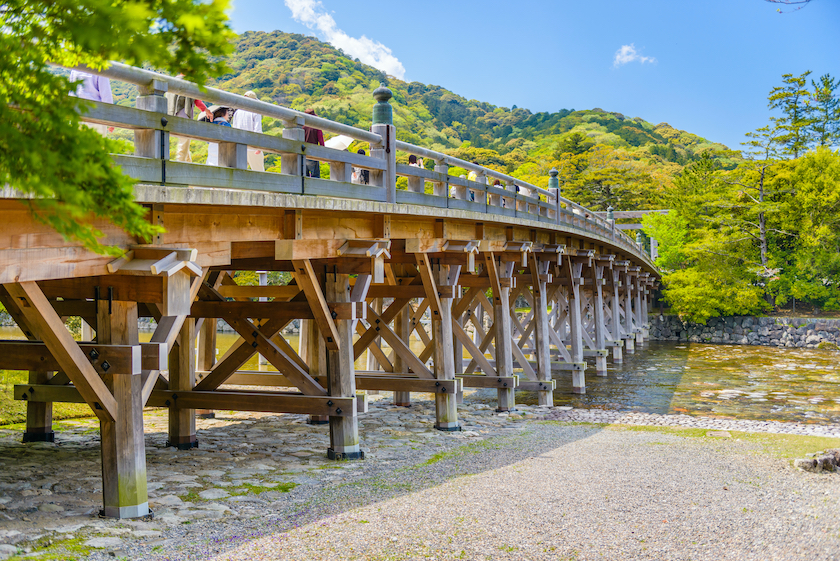 Other attractions near Ise Jingu
If you walk over the Uji Bridge on the Ise bank of the river you’ll find the streets of Oharamachi and Okageyokocho. These beautiful and traditional pedestrianised streets with wooden buildings sell local food and goods and are known for being treasure troves for regional delicacies. There are also Japanese drum (taiko) performances at weekends which adds to the bustling, carnival atmosphere of these picturesque streets.

Mount Takao (高尾山, Takao-san) is a mountain just west of Tokyo, and a perfect day trip for hiking and be surrounded by nature.

Discover Japan’s most unusual accommodation with our guide to quirky and interesting places to stay across this spectacular and unforgettable country.