People from different cultures have specific social norms ingrained in them from a young age. For example, tattoos are frowned upon in Japan, but they are widely accepted in America. While travelers don’t have to know the specifics of every culture, it’s important to learn the basics of culture to experience it.

Learning about new cultures can foster tolerance and acceptance, allowing others to understand why people act in a certain way. Japan has many etiquette rules and taboos that can be helpful for travelers to learn before visiting there. Travelers utilizing Japan’s railway system will find an etiquette structure that is ingrained in the society through posters, and modeled by many fellow passengers. Though you don’t have to learn all of the customs, knowing how to act when visiting Japan will show that you respect the culture, which the Japanese will greatly appreciate.

Japan has many different social cues and etiquette rules to be aware of. It can be hard to remember when to bow, take off your shoes, or even how to eat. Luckily, Japanese people are aware that visitors can have a hard time when first visiting Japan. The number one rule to remember is to be as respectful as possible. Japanese people are extremely polite and welcoming, and understand that newcomers may not be well-versed in the local social rules and customs.

When in doubt, ask for clarification and be courteous. You can always look up specific customs using the internet if you get confused, using mobile Wi-Fi hotspot devices. These will ensure that you will have internet access no matter where you travel in Japan.

Bowing is a part of everyday life in Japan. Knowing when and how to bow can seem overwhelming at first, since it is not common in every culture. In many instances, bowing takes the place of handshakes, which can be difficult to get used to if you are a visitor. Luckily, many Japanese are used to shaking hands when meeting non-Japanese. 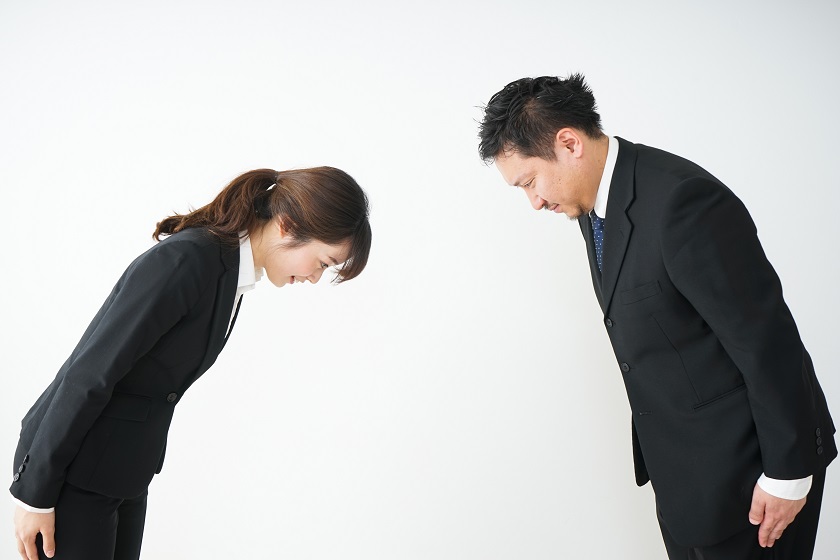 How to Bow in Japan

Bowing, or “ojigi,” was taught to warriors when they encountered samurai. Then, around the 1600s, this warrior etiquette spread throughout communities and became prevalent in modern Japanese society. Bowing represents respect and emphasizes social rank. In many aspects, such as Japanese businesses, adults will take extra care to teach bowing as it is a defining quality of adulthood.

Though the Japanese don’t expect visitors to know the intricacies of bowing, it will earn you respect if you show some knowledge of the practice. Bowing may seem simple, however, many occasions call for different types of bows.

When bowing, there are two positions to start from: standing (seiritsu) and sitting (seiza). When performing seiritsu, it’s important to keep these practices in mind:

If you are starting in seiza, which is expected in almost all formal situations, you’ll need to keep these practices in mind:

While bowing is intricate in its most basic form, there are also different kinds of bows for different occasions. They include:

There are also common mistakes associated with bowing:

If you are traveling through Japan, you may have noticed that you are required to remove your outdoor footwear when entering certain establishments. The Japanese have observed this custom for many years. Since the Japanese developed the custom of eating meals and sleeping on tatami mats, they take their outdoor shoes off to keep their spaces clean.

It is easy to know where to put outdoor footwear when entering a Japanese home or traditional establishment. Most buildings will have a “genkan,” or an entryway, which is divided into a lower area where people can change out of their shoes. The elevated area that leads into the house or building is typically made out of a different material, indicating that it is the start of the house and indoor footwear should be worn from that point.

Other places that require indoor footwear are:

Since entering someone’s house barefoot is considered ill-mannered, hosts provide slippers to accommodate guests. Socks are worn with these slippers to maintain hygiene. This is just one etiquette rule when visiting Japanese homes. Other tips for footwear etiquette include:

Dining in Japan has certain etiquette rules, especially involving tipping. Contrary to other countries, tipping is not common in Japan. This is because Japanese culture is strongly rooted in dignity and hard work. Good service should encompass these traits and represent the standard in service. Tipping for the standard is viewed as unnecessary. Trying to leave a tip will most likely confuse, so a general rule is to avoid tipping.

However, there are two exceptions:

If you do plan to leave a tip, make sure to place the money into an envelope and use both hands to present it, as taking money out of your wallet can seem crass. If you do not plan on tipping, there are alternatives forms of gratification:

As stated before, the Japanese understand that travelers may not know every single etiquette rule — they expect you to make mistakes. However, it does show appreciation and admiration for their culture when a traveler takes the time to learn their social norms, and it can enhance your visit by being immersed in Japanese customs.