Why You Can’t Miss the Toji Temple in Kyoto

Table of contents:
A Brief History of Toji Temple
Architecture of the Halls and Pagoda
Kobo-Ichi Flea Market
Cherry Blossoms at Toji Temple
Tips for Visitors to Toji Temple

The city of Kyoto is adored by travellers for its great history and wealth of major cultural landmarks. Toji Temple falls into both of those categories, easily making it one of the city’s most important attractions. This Shingon Buddhist temple is one of Kyoto’s oldest temples and rightfully one of Kyoto’s many proud UNESCO world heritage sites.

Visiting the temple with your Japan Rail Pass, you’ll have the chance to see a great selection of historic buildings and possibly visit one of Kyoto’s liveliest markets if you’re lucky. Here’s everything you need to know about this impressive Japanese temple.

A Brief History of Toji Temple

To properly understand why Toji Temple is worth your time and how it earned world heritage status, we need to look briefly at its history.

Toji Temple was constructed in 796 just two years after Kyoto was made the new imperial capital. The temple, who’s name means “East Temple”, was built just to the east of one of the massive gates that protected Kyoto, the Rashomon gate.

While in the past there was also a “West Temple” on the opposite side of the Rashomon gate, neither this temple nor the gate have survived to the present day. The purpose behind the two temples was as a sort of spiritual ward for the city, protecting Kyoto from negative spirits.

Possibly part of the reason Toji Temple still stands today has to do with its relationship with Kobo Daishi, founder of Shingon Buddhism. Kobo Daishi was made the head priest of the temple in 823, meaning it soon became one of the most important Shingon temples in Japan. The priest not only had a spiritual effect on the temple but was also responsible for many of the buildings that were later added.

Architecture of the Halls and Pagoda

With a visit to the Toji Temple there are quite a few different attractions to see spread throughout its grounds. These mostly consist of impressive halls and the temple’s signature pagoda, but there are also sights like the Nandaimon Gate and the Lotus Flower Gate. Also worth mentioning is the Homotsukan Museum, where a great number of artifacts from the temple are on display.

One of the structures built during the time of Kobo Daishi was the temple’s iconic five-storied pagoda. It was originally built in 826 but has burned down several times during its history and was last rebuilt in 1644. 55 metres tall, it was long the tallest building in Kyoto before the Kyoto Tower arrived in 1964. It is still the tallest wooden tower or pagoda in Japan and its stature has made it a familiar part of the city’s skyline. Unfortunately, the pagoda is rarely open to the public, but when it is you’re able to see the four Buddha statues that occupy its ground floor.

The other main landmarks throughout the temple grounds are a collection of halls, with three considered the main halls to visit. They are the Kondo Hall, Kodo Hall and Miedo Hall, each with their own design and purpose.

The Kondo Hall is the main hall and largest building at the Toji Temple. Although one of the original buildings at the temple, it was rebuilt with a contemporary design after a fire burned it down in 1486. Inside the Kondo Hall stands a wooden statue of the Yakushi Buddha, which is the main focus of worship at the temple.

Next to the Kondo Hall is the Kodo Hall, home to 19 statues with Dainichi Buddha at its centre. This hall was added by Kobo Daishi in 825, who had the statues brought over from China. While the Kodo Hall also succumbed to the fire in 1486, it was rebuilt in its original style.

Finally, there’s the Miedo Hall, also known as the Founder’s Hall. As that name would suggest, inside lies a statue to Kobo Daishi himself, who has become a figure of worship since.

Beyond its ancient halls and famous pagoda, there’s one other reason to visit this Kyoto temple – the Kobo-Ichi Flea Market. This bustling flea market is held on the 21st of each month, honouring the death of Kobo Daishi on March 21st. The popular market takes place in the temple grounds throughout the day, with a great long list of items being sold by vendors there.

At the Toji Temple Flea Market you’ll find anything from antiques to kimono, clothes, toys, pottery and food for sale. Both new and second-hand goods are up for sale and it’s possible to find some great bargains here. Even if you don’t end up buying anything, the market is an interesting thing to experience and you never know what you might find there. 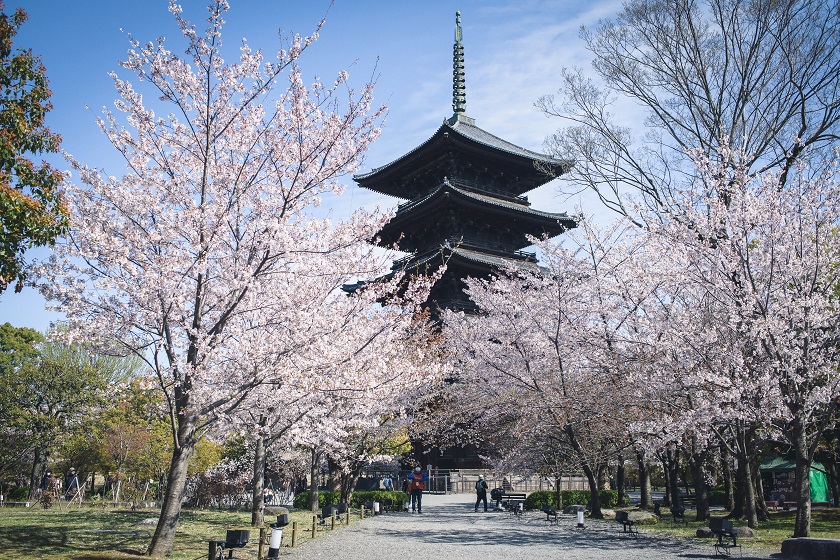 Kyoto is a city known for being a great place to see cherry blossoms during spring. One of the city’s best spots for seeing them just so happens to be the temple grounds of Toji Temple. The grounds are especially photogenic thanks to one particularly large weeping cherry tree full of beautiful pink blossoms. During the season of hanami, the grounds are also illuminated at night, making both Toji Temple and the cherry blossoms even more incredible.

Tips for Visitors to Toji Temple

Mindfulness and meditation are more popular than ever in today’s increasingly busy and fast-paced world and what better way to rediscover your inner peace and serenity than by travelling to Japan?

Is The Jr Pass Worth It?

One of the questions we get most on the JR Pass forum: Is the JR Pass worth it? Today we find out, with 5 usage scenario's for the Japan Rail Pass.

Japan isn't as incomprehensible as some would let you believe, all the major cities have signs in English, with a bit of concentration travel is easy!