The Silver Pavilion is one of Kyoto’s most beautiful and underrated temples, home to ancient buildings and stunning gardens.

Kyoto is famous for its ancient landmarks, with many international visitors doing their best to see as many as possible while they visit. Chief among these historical attractions are Kyoto’s Buddhist temples as they reflect Kyoto’s long-held spiritual importance. But with so many to visit, some ancient temples like the serene Silver Pavilion have a habit of being overlooked.

The Silver Pavilion is an elegant Zen temple found out in the east of Kyoto that is home to some impressive temple buildings and pretty gardens. Thanks to a similar name and their tied history, the Silver Pavilion is often seen as a sibling to the famous Kinkakuji Golden Pavilion. But there’s certainly plenty of difference between these two, so you really should try to visit both if you can. To that end, here’s what you need to know about the Silver Pavilion when you visit Kyoto with your Japan Rail Pass.

History of the Silver Pavilion

The long history behind the Silver Pavilion not only makes this attraction more interesting, but also helps explain the reasoning behind its name. As such, it really pays to know a little of its past before you visit.

The Silver Pavilion was originally constructed in 1482 as a retirement villa for Shogun Ashikaga Yoshimasa in the eastern mountains of Kyoto. It was modelled after the Golden Pavilion which was built for the shogun’s grandfather. Following the death of Yoshimasa, the villa was converted into a temple and is now seen as an important example of the Higashiyama Culture of the time.

The official name for the temple was Jishoji after the name – Jisho – that the shogun took when he became a monk. However, it is far better known as Ginkakuji or the Silver Pavilion, despite the fact that this temple was never covered in silver.

There are various explanations of how the temple earned this name, including the belief that it was once supposed to be covered in silver foil or that it was a nickname inspired by the Golden Pavilion. Whatever the reason, this temple is still incredibly beautiful without being coated in silver.

What to See at Ginkakuji 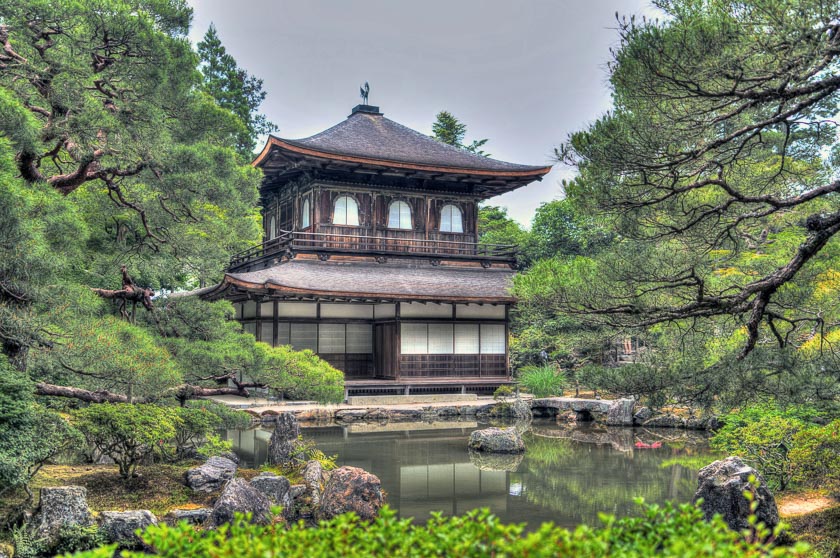 There are a number of different things to see when visiting Ginkakuji, but obviously the most important is the pavilion that gives the temple its name. The two-storey pavilion is officially known as the Kannon Hall and is dedicated to Kannon, the Buddhist goddess of mercy.

Unlike most structures within the temple grounds, the pavilion has survived intact over the centuries, only undergoing regular work to preserve it. While it’s possible to admire the pavilion from the outside, there’s no public entry inside.

Part of what makes this pavilion so intriguing is the way that it embodies the Japanese concept of wabi-sabi. The notion of wabi-sabi is the idea that you can find beauty in imperfections, which in the case of Ginkakuji is related to its understated aesthetic.

Although the main pavilion is the most iconic building at Ginkakuji, there are several other temple buildings here to see. One if the Hondo, the main hall of the temple, which features some beautifully painted sliding doors. Then there is the Togudo, the other original temple structure that has been preserved since the 15th century. To see the different structures, take the circular walking trail and do a lap of the temple grounds. 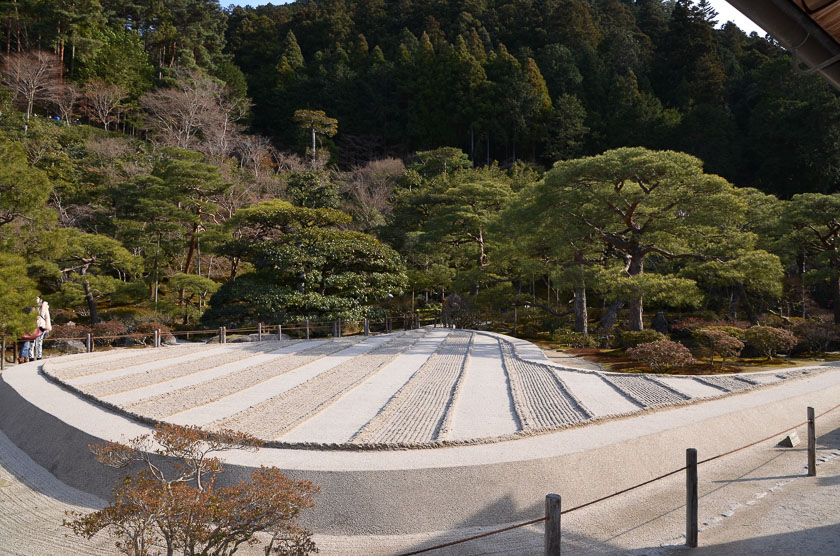 While walking the grounds of the temple you’ll come across two gardens, that many find to be the highlight of a visit here. The more popular of the two is the sand garden, dubbed the “Sea of Silver Sand” that has been precisely raked to beautiful effect. To admire the garden, visitors climb a sand sculpture that’s meant to represent Mt Fuji.

The other garden here is the moss garden of Ginkakuji, another common sight in Zen gardens that reflects the passage of time. Among this garden you’ll find ponds, streams, islands and bridges, that together create a calming sense of tranquillity. 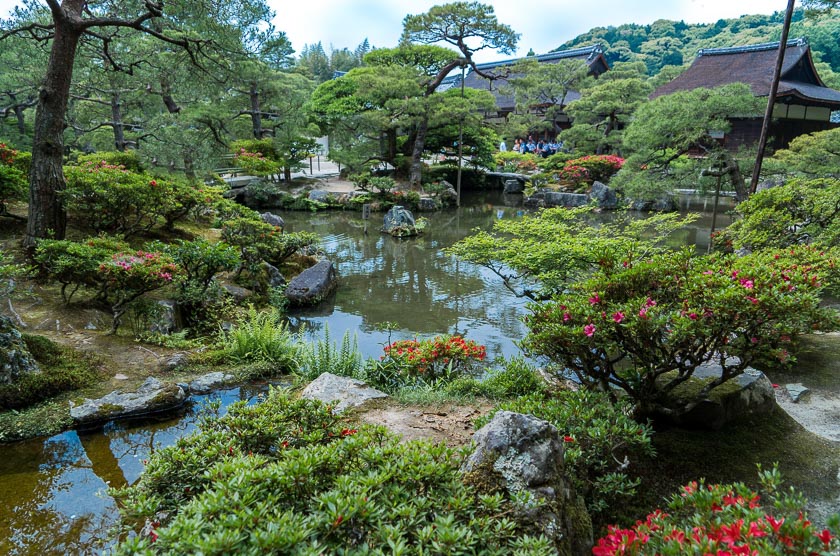 Visiting the Silver Pavilion with the JR Pass

While the Silver Pavilion is an important Kyoto landmark, it is not one of the city’s most accessible. It’s location out in the foothills of the eastern mountains means you won’t find any convenient train or metro stations nearby. This means your JR Pass won’t be much use once you’re actually in Kyoto.

The two most common ways to get to the Silver Pavilion are by bus or on foot. The 5, 17 or 100 buses all run from Kyoto Station to the temple, taking around 40 minutes to get there.

Another approach though is to take the Kyoto Metro to the Nanzenji Temple and then walk the popular Philosopher Path over to the Silver Pavilion, taking roughly the same amount of time.

One of the fun festivals found right around Japan is the ancient Tanabata Festival, often referred to as the Star Festival.