Walking the Philosopher path in Kyoto

The Philosopher path (哲学の道 – Tetsugaku no michi) is a scenic walkway following a small water canal in the Higashi-yama district in the north-east of Kyoto.

Starting at Nanzenji Temple, the path follows a small canal line with hundreds of cherry blossoms trees and passes a number of temples and shrines including Eikan do Zenrin-ji, Otoya Shrine and Honen-in, before ending around Ginkakuji, the Silver Pavilion. The path is picturesque from beginning to end and especially so during the Sakura season.

The name Philosopher path comes from it being the walking route of Nishida Kitarō, one of the most significant and influential Japanese philosophers. He used the path often to walk from his dwelling to Kyoto university, and was often found somewhere along the path in contemplation and meditation. 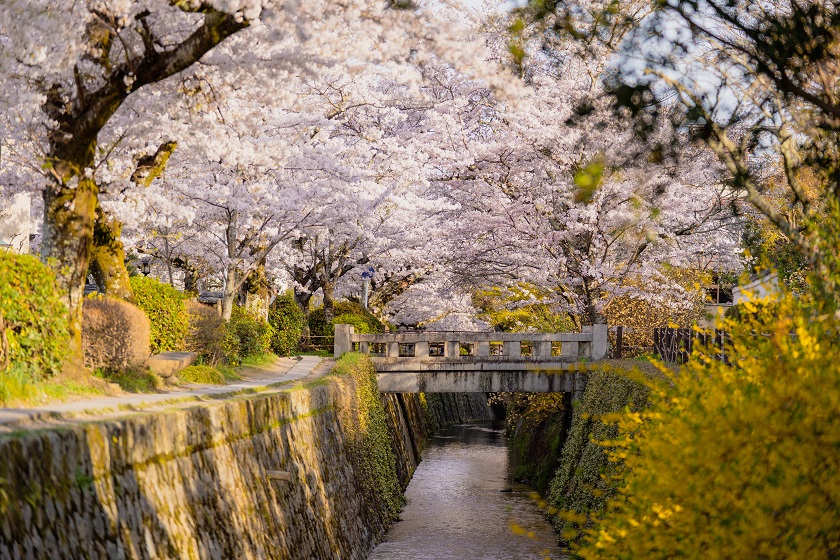 These days the path is a popular destination for locals and tourists alike, due to the many varieties of coffee shops, boutique shops and small temples. Walking the path itself takes about half an hour, it is possible to spend many hours exploring the area. There is a series of beautiful photo opportunities near the northern part of the path, overlooking Daimonji mountain and surrounding forest.

The canal itself runs for about 20km and has been around for about 150 years. It was dug to transport water to the Higashiyama district, to power Japan’s first hydroelectric power plant. As part of the canal, there’s an appealing aqueduct near Nanzenji.

When is the best time to visit the Philosopher path?

The Philosopher path can be visited year round, and there are no closing hours. The best time to visit the Philosopher path is during the Sakura Season, when all the trees turn a beautiful pink, or during autumn when the surrounding area turns into an impressive pallet of reds and browns.

The path can be pretty busy during the day with tourists, for the best experience it is recommended to come either early or a little before dark when most tours are finished. The path has a completely different, but romantic atmosphere after dark and is worth exploring at night as well.

Getting to the Philosopher path

Using the Kyoto metro, the best station to get out at is called Keage station, on the Tozai line.

There is unfortunately no JR Station nearby.

Being home bound does not mean having to stop exploring the world. Get inspired with this Virtual Tour of Japan’s Most Beautiful Spots using Google Street view.

The opportunity to experience genuine Japanese food is a "must do" for any visit to Japan and one great way to explore Japan’s food culture is by visiting an Izakaya.