The Nozomi is a train service that runs between Tokyo and Fukuoka stations and uses the Tokaido and Sanyo Shinkansen bullet train lines, and is operated by JR Central and JR West. The Nozomi train service is one of the few trains not included in the JR Pass, though plenty of alternatives are available.

The Nozomi is often misunderstood as being a train line but this is not the case, the Nozomi is merely a train service. A train service in Japan basically means what route the train travels and how many stops are along the way.

For instance, on the Tokaido Shinkansen line, there are 3 train services. These are the Nozomi, the Hikari and the Kodama. The main difference here is that the Nozomi stops at the least amount of stations, the Hikari only at the most important stops and the Kodama at each stop along the way. 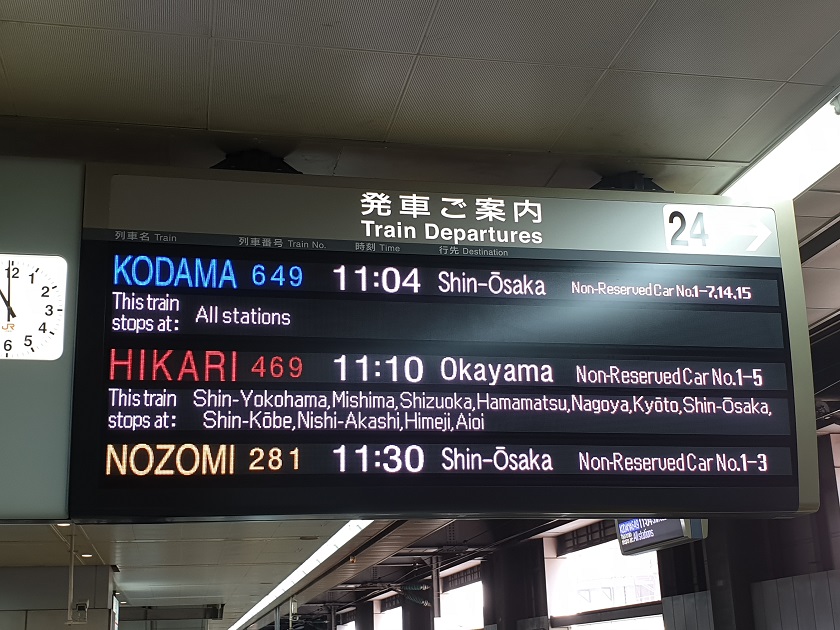 This way business people can travel fast from meeting to meeting, while tourists can get off at their desired stop, like Mt. Fuji!

Can I use the Japan Rail Pass on the Nozomi train?

The Nozomi cannot be used using the JR Pass, and no there are no secret workarounds or upgrade paths available. That said, the difference between the Nozomi and the Hikari is negligible. For instance on the route Tokyo – Kyoto, the Hikari only takes 19 minutes more due to a couple extra stops along the way. Apart from that, the train, on board service and amenities are all the same.

So you may ask:“Why is the Nozomi excluded from the JR Pass?” The answer is twofold. One reason is to keep the Nozomi for commuter travel only, and second is to offer the JR Pass at the price it currently is. Including the Nozomi would up the price significantly.

How to buy a ticket for the Nozomi Shinkansen.

Ticket purchases for the Nozomi, or any other Shinkansen for that matter, are quite easy. Either go to a JR Ticket window (Midori-no-madoguchi in Japanese) or use a ticket machine. We suggest using a manned ticket office as you only have to tell the staff when and where you want to travel, and they’ll take care of the rest.

How fast is the Nozomi train?

The Nozomi Shinkansen can reach top speeds of over 300 km/h (186 mph). The fastest travel time between Tokyo – Kyoto is 139 minutes, over a distance of 476.3 KM. That means the average speed is around 205 km/h, the time for stops included. The Nozomi Shinkansen however is not the fastest bullet train in Japan , that honour goes to the Hayabusa Shinkansen, which happens to be fully covered by the JR Pass.

What does Nozomi mean?

The term Nozomi (written as のぞみ) means Wish, Desire or Hope in Japanese. Before the opening of the Shinkansen line between Tokyo and Osaka, the name was already used by fast conventional trains and has been in use since 1932.

What happens if I board the Nozomi with a JR Pass (but without a ticket)?

As the JR Pass is not a valid ticket on the Nozomi, it means you’ll eligible to pay the normal fare for the ride. This can add up quickly, for instance a one way ride Tokyo – Kyoto is about 15.000 yen. In case of (suspected) foul play, this amount will be tripled. That said, JR Staff is aware that mistakes can happen and you will likely be asked to leave the train at the next station without a fine, this is up to the discretion of the conductor, so better not risk it.

Both in the station and at the platforms there are electronic signs that show the train service and departure details. Follow these, and you’ll always be on the right track!

Everything You Need To Know About

With its unbeatable views of iconic Mt. Fuji, its beautiful and distinctive traditional architecture, and its incredible location, nestled amongst cherry blossoms and trees in Fuji Five Lakes, Chureito Pagoda has it all.

Atami is an onsen resort town not far from Tokyo where visitors can go for a good soak in the town’s many hot springs.

We tried Pocket Wifi in Japan, here's what you need to know about getting your Pocket WiFi while travelling around Japan.