Mount Fuji is the most famous natural landmark in Japan and one place that all visitors to the country hope to visit. While climbing Mt Fuji is an incredibly rewarding experience, the mountain isn’t the only attraction in the region. Enter the Fuji Five Lakes, a series of five lakes by the base of the volcano that are an incredible destination all on their own.

Travel to the Fuji Five Lakes and you’re treated to a wonderful variety of things to do, from admiring the scenery of the lakes to other cultural and natural attractions. In fact, there’s so much to do here that you’ll want to visit with a plan just to make sure you make the most of your time. Read on for an introductory guide to the Fuji Five Lakes for when you visit with your Japan Rail Pass.

Background to the Fuji Five Lakes 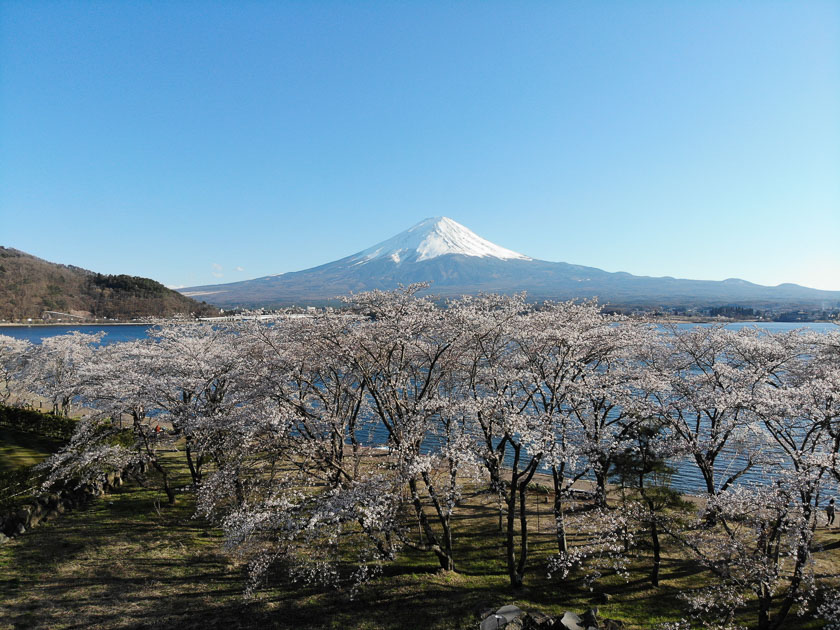 The five lakes of the Fuji Five Lakes are Lake Kawaguchi, Lake Yamanaka, Lake Motosu, Lake Saiko and Lake Shoji. Lava flows from Mt Fuji formed all of the lakes at different times by damming up local rivers, with some lakes still connected by subterranean waterways. All of the lakes sit at around 1000 meters above sea level but are still a long, long way from the peak of Mt Fuji.

Lake Yamanaka is the largest of the five lakes and sits off in its own a little to the east of Mount Fuji. However, it’s Lake Kawaguchi that is the most popular of the lakes because it enjoys the best views of the mountain and is the easiest to reach. As for the most natural, undeveloped lakefronts, you can visit either Lake Saiko or Lake Motosu.

What to See at the Fuji Five Lakes

There’s really no end to the number of places to visit in the Fuji Five Lakes, meaning it’s possible to shape your visit to your interests. Rather than cover every single attraction and sight around the lakes, we’re going to focus on some of the most popular things to do in the Fuji Five Lakes. These won’t include attractions in the city of Fujiyoshida like the Chureito Pagoda, Fuji-Q Highland and the Arayayama Shrine, as the city is almost another destination yet again.

The Fuji Five Lakes provide plenty of opportunities for views of Mount Fuji, but the view from Mount Tenjo by Lake Kawaguchi is one of the best. To reach its special panoramic point 200 metres up take a three minute ride on the Mt. Fuji Panoramic Ropeway. Once you’ve finished soaring over the treetops on the ropeway, you’re rewarded with an iconic view of Mt Fuji and a romantic little spot at the Bell of Tenjo.

Lakes weren’t the only part of the landscape shaped by lava flows from Mt Fuji, as proven by the Aokigahara Forest. Resting on the northwest side of the volcano, this forest stretches from near Lake Saiko all the way to Lake Motosu and rests on a lava plateau created by eruptions in the 9th century. The name Aokigahara translates as “Sea of Trees” and it’s a beautiful, lush forest with walking trails through it.

To experience some of the local culture it’s worth paying a visit to the Kubota Itchiku Art Museum. Dedicated to the works of 20th century artist Kubota Itchiku, this museum on the north shore of Lake Kawaguchi showcases kimonos he created. His kimonos, crafted using traditional silk dyeing techniques, portray various universal themes, while his unfinished labour of love “Symphony of Light” uses 80 kimonos to form a picture of Mount Fuji.

Out by the Aokigahara Forest near Lake Saiko there are a series of caves that are sure to fascinate, with the Narusawa Ice Cave perhaps the most spectacular of them all. As its name suggests, this cave is full of frozen wonders, including pillars of ice that measure up to 30 metres and gorgeous illuminated rock formations. To see the Narusawa Ice Cave at its best, you really need to visit during winter or early spring though.

Sitting between Fujiyoshida and Lake Yamanaka is the gorgeous little garden of Oshino Hakkai home to eight ponds and traditional feudal homes. A kind of open-air museum, this serene and beautiful spot transports visitors to a simpler, calmer time as they wander past ponds, water-wheels and old-fashioned surroundings.

Visiting the Fuji Five Lakes with the JR Pass 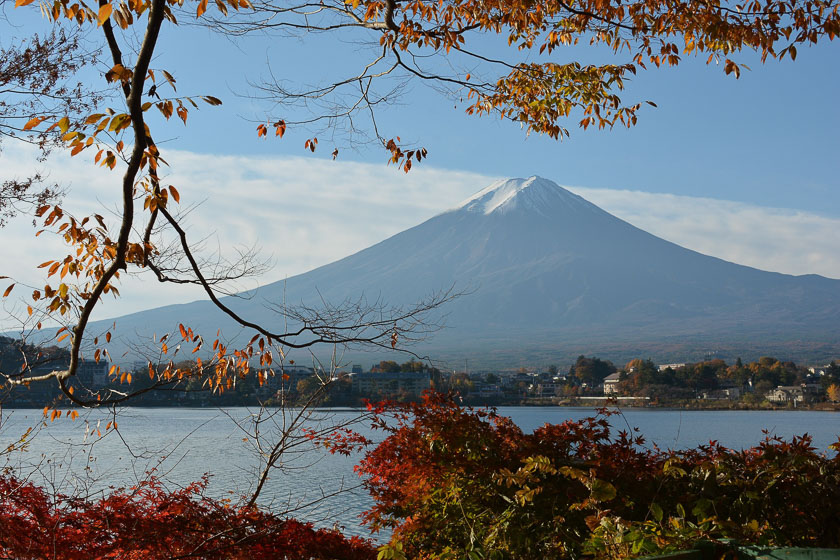 To travel to the Fuji Five Lakes from Tokyo you have a few options open to you including both bus and train. However, if you’re travelling with the Japan Rail Pass or one of the other types of train passes in Japan, you’ll likely want to know how to get there by train. While it’s possible to make use of the Fuji Excursion Limited, that won’t allow you to use your JR Pass.

Pass holders will want to take the JR Chuo Line from Shinjuku Station in Tokyo and get off at Otsuki Station. From there, you’ll need to use the Fujikyu Railway Line to reach Kawaguchiko Station, the best place to start exploring the area. It’s important to understand that only the JR Tokyo Wide Pass covers this entire route, while the JR Pass only covers up to Otsuki Station.