Back to Itinerary check

Before I purchase either a 7-day pass or a 14-day pass I would like to know if the Japanese Rail pass can be used in the following transport journeys:

Thank you very much in advance.

In answer to your questions about using a Japan Rail Pass:

From the Narita express train from Narita airport to Tokyo.

Yes. The Japan Rail Pass can be used from Narita Airport to Tokyo station on the Narita Express

Yes. The pass can be used on all JR lines in Tokyo (including the Chuo and Yamanote circle line)

The bus (either regular or express service) from Kagoshima airport to Kagoshima city.

No. JR does not run buses between Kagoshima Airport and the city. You will have to board a non-JR bus, either 'Airport Limousine' or 'Nangoku Kotsu', that runs between the Airport and the Kagoshima Central Station (Kagoshima chuo). From here you can board a variety of local JR trains that will be able to get you to other nearby destinations)

The ferry from Miyajimaguchi station (near Hiroshima) to Miyajima Pier.

Yes. You can use the JR Pass on the Miyajima ferry crossing from Miyajimaguchi.

The bus from the Shinjuku bus terminal in Tokyo to Kawaguchiko (Fuji Five lakes area).

No. JR does not run this bus, it is operated by the Keio or Fuji Express services, and costs around ¥2000 return. Here's a timetable of service with some useful numbers for reservations. As a Japan Rail Pass holder, you can also get to Kawaguchiko by train for roughly the same price as the bus by getting the train from Shinjuku to Otsuki, and then transferring to the Fuji Express train to take you all the way to Kawaguchiko. There are lots of trains on this route, so it may be a better choice if you prefer to travel in a bit more comfort (timings are also slightly faster by train). Here's a sample rail itinerary for you

I hope all this helps!

Starting from $225.00 for 7 days of unlimited Japan Rail travel

Learn from over 15188 questions about the Japan Rail Pass, or ask our Japan Rail travel experts 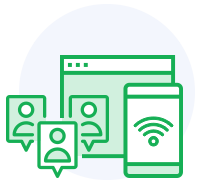