What to See at Yasukuni Shrine in Tokyo

Japan is home to many gorgeous and fascinating temples and shrines. But one of its more unusual and controversial is the Yasukuni Shrine in Chiyoda City in central Tokyo. This Shinto shrine is dedicated to the spirits of those who died for Japan during wars and conflicts, and has strong ties to the Japanese Imperial family. This makes it both a place of worship and a war memorial of sorts, something that tourists should find quite intriguing.

Background of the Yasukuni Shrine

To understand why you should visit the Yasukuni Shrine, it’s first important to know a little about the shrine’s origins and purpose.

The Yasukuni Shrine was founded in 1869 by Emperor Meiji to commemorate those who sacrificed their lives in service of Japan during the Boshin War of 1868–1869. In the century that followed, the shrine was also used to honour the dead from Japan’s other wars and national crises, including the Russo-Japanese wars, World War I, and the Greater East Asian War, aka. World War II. The spirits of about 2.5 million people are enshrined here, with each person recorded within and venerated equally.

While Yasukuni Shrine is dedicated to the preservation of peace, it’s not without its fair share of controversy. That’s because among those it remembers are over a thousand convicted war criminals, which alone is quite troubling. But there have also been official visits by Japanese prime ministers to the shrine, also raising issues regarding the separation of church and state.

Sightseeing at the Yasukuni Shrine 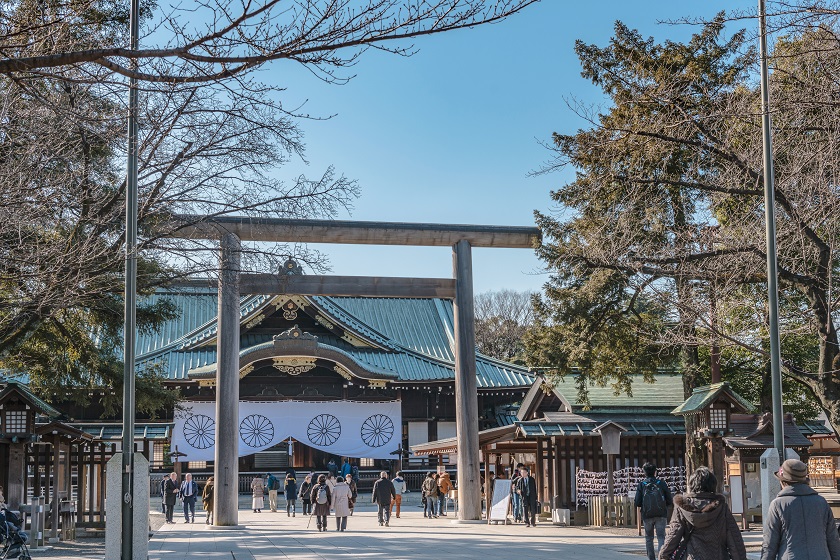 With a visit to the Yasukuni Shrine, you’ll have the chance to explore the shrine’s grounds and various landmarks therein.
Entering the grounds, you’ll pass through a rather plain grey, metal torii gate at the entrance, but that isn’t a fair indicator of what this shrine has to offer. There are actually quite a few torii gates here, as well two large stone lanterns erected to honour the Army and Navy.
Around the shrine area you’ll also spot various statues, but the bronze statue of Minister of War Omura Masujiro particularly stands out. There are also even statues memorialising the horses and dogs that died during service in Japan’s military.
Of course, then there’s the main attraction here, the Haiden Main Hall. This is the place within the shrine where visitors pay their respects. However, this is not the largest building at the Yasukuni Shrine; that is the Sanshuden reception hall that is used for formal occasions.
You can also add the Yasukuni Shrine to the list of great places in Tokyo to see the cherry blossoms in spring.

Besides the shrine buildings you’ll find the Yushukan War Memorial Museum. This large and modern museum details and commemorates Japan’s wars and the national military that has served in them since the Meiji Period. As the museum recounts a specific perspective on Japan’s military history, that alone might tempt international tourists to visit. Among its exhibits include a video theatre and military equipment including a complete World War II fighter plane.

Tips for Visitors to Yasukuni Shrine

Visiting the Yasukuni Shrine with the JR Pass

Getting to the Yasukuni Shrine in Tokyo is quite easy using the city’s metro network. Unfortunately, this does mean that you won’t be able to use your JR Pass for the full journey to get there. The closest station to the shrine is Kudanshita Station.

Coming from Tokyo Station, either walk or take the Marunouchi Subway Line to Otemachi and transfer to the Hanzomon Subway Line. From Shinjuku Station, simply take the Shinjuku Subway Line directly there.

Perhaps THE most social part of the Japanese calendar, Hanami is a beautiful time to visit the country and join in some cherry blossom bbqs!

There are few absolutes in life, but if you love trains, there is no better place in the world for you to visit than Japan. From iconic steam trains to hyper modern bullet trains, Japan has them!