The JR Yamanote line(中央線), or Yamanote loop line runs in a cirlce around Tokyo stopping at important stations like Ikebukuro, Shinjuku, Shibuya & Tokyo stations. Read our comprehensive guide to the Yamanote line below.

The Yamanote line also connects with the JR Chuo line at Tokyo and Shinjuku stations, together they make up for the most important railway lines in central Tokyo.

Nearly every visitor to Tokyo will have been on the Yamanote line at least once (much more likely) and understanding the line will help you navigate Tokyo like a pro!

What is the JR Yamanote line?

The JR Yamanote line, Yamanote loop line, or sometimes simply called Tokyo Loop Line is a circular line in central Tokyo, and much used by commuters and visitors alike. The Yamanote line has a daily rider ship of up to 5 million people, stops at 30 stations and has a total length of 34.5 km (21.4 mi).

Going full circle on the Yamanote line takes a little over an hour, as stations are only 2-3 minutes apart.

The Yamanote line is the most iconic line in Tokyo, as it used green livery on each train and on maps looks like the green line going around Tokyo.

There are only local services on the JR Yamanote line and trains stop at every station. Service is very frequent with trains departing every 2-3 minutes during busy times and every 5 minutes during off-peak. 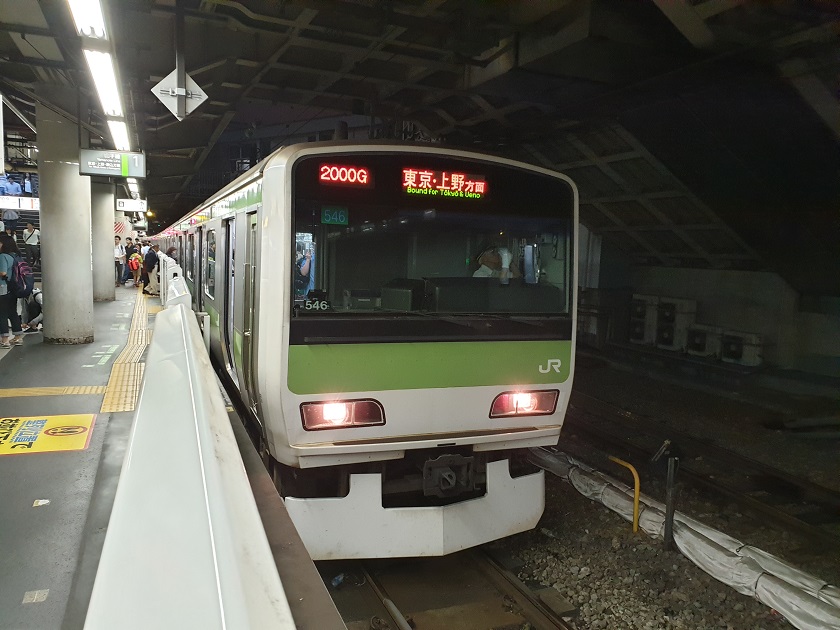 The line operates in both directions. Clock wise service is run on the outer loop trackers (called outbound) and anti clock wise runs on the inner tracks (and is called inbound). Be sure to check which direction is fastest, or else you may be experiencing more of the loop than needed :)

Below is a map of the JR Yamanote line, for a full map of all JR Lines see our interactive Japan Rail map. 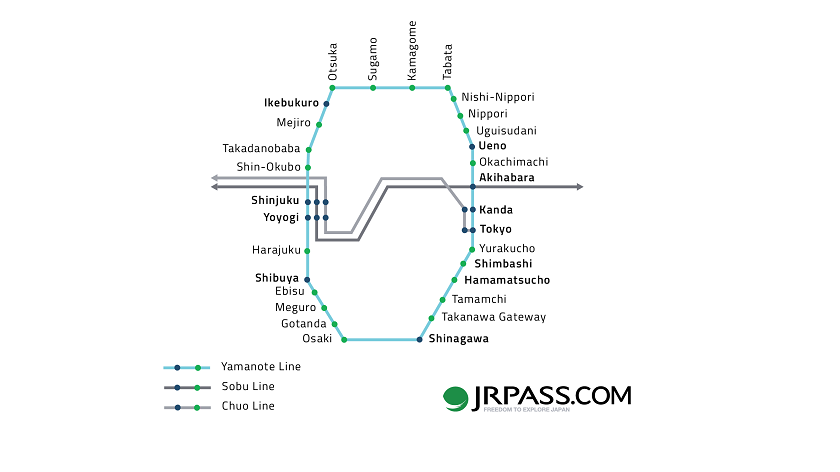 Can I use the Japan Rail Pass on the Yamanote line?

Yes, the JR Yamanote line is fully covered by the JR Pass as there are no seat reservations on local trains, all you have to do is show your pass when entering and exiting the station. Then hop on and off the train as you like :)

Stations on the Yamanote line

Running the outerloop of the Yamanote line, the 30 stations in order are:

Tips for riding the Yamanote line

We have compiled everything you need to know to view the cherry blossom in Japan. Including the best dates to go based on the Sakura forecast for 2020

It’s time to ask THAT question of your loved one, but where to do it? Thankfully, Japan is filled with beautiful, unique and once-in-a-lifetime locations to get down on one knee.