The Japanese tradition of cherry blossom festival (hanami) is a celebration that is centuries old. It is held throughout Japan and in many other places around the world. The celebration consists of holding parties under the short-lived cherry blossoms as they bloom. These parties may occur during the day or nighttime (the nocturnal equivalent is called yozakura). Countless native citizens and foreign visitors alike celebrate and sometimes even tour Japan by rail during this time to take in all the sights.

Cherry blossom festivals are a unique type of celebration, in that the timing of the festivals depend on when the trees blossom. Furthermore, the flowers only bloom for a very short time — a maximum of two weeks. This means that the country at large has its eye on the trees, ready to burst into celebration as the flowers bloom. Due to this, Japanese news stations actually monitor and report on the “Cherry Blossom Front” (sakura zensen) in what is called “The Blossom Forecast”. 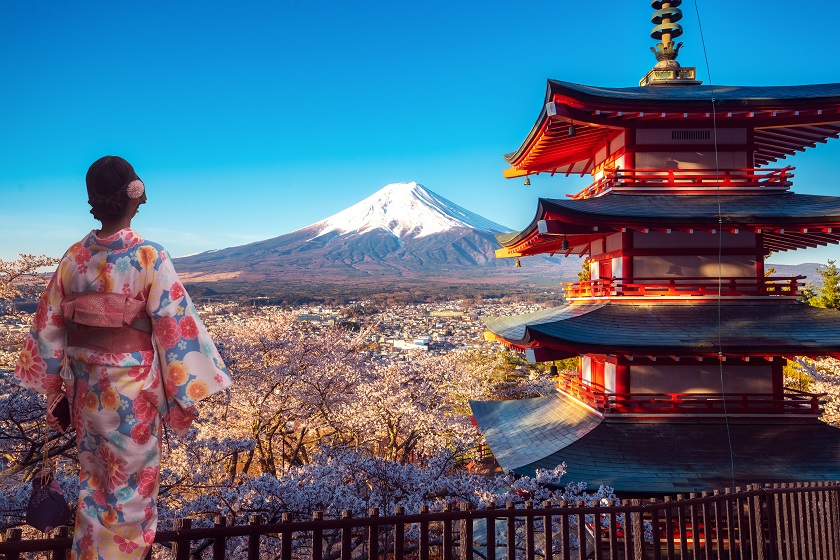 Sakura, and their ephemeral blooms, in particular, are of great significance in Japanese culture. The festivals dedicated to the trees even inspired a popular folk song called “Sakura, Sakura” or just “Sakura.”

Although the majority of Japanese citizens do not identify as belonging to an organized religion, historically, the two most prominent religions in the country have been Shinto and Buddhism, and these have strongly influenced Japanese culture. Sakura hold significance in both religions.

In the case of Shinto, Japan’s ethnic religion, sakura are thought to house kami (sacred spirits or forces). Meanwhile, the ephemeral nature of the cherry blossoms mirrors the great importance of transience in Buddhist doctrine.

The History of Hanami

Centuries old, the tradition of hanami may have begun as early as the Nara period (710–794 CE). Although modern hanami most commonly centers around sakura, the original practitioners celebrated under ume (plum trees). Hanami, which revolve around admiring plum blossoms rather than cherry blossoms, are still held in the modern-day, but they are smaller, less raucous affairs.

Originally, hanami was a festivity exclusive to the Japanese Imperial Court. Over time, however, the tradition diffused into the general culture of Japan and beyond.

When and Where Are Cherry Blossom Festivals Held?

Although cherry blossom festivals are, of course, most common in Japan, the celebration has caught on beyond their borders as well. Korea, China, Sweden, the United States, and many more countries around the world have adopted the tradition, often with the help of sakura gifted from Japan. In the U.S., the festivals are most notably held annually in Washington, D.C. and Macon, Georgia. Although the Japanese tradition is called hanami, many of the individual festivals and associated celebrations — both in and outside Japan — are named Sakura-Matsuri (literally meaning “cherry blossom tree festival”) or some variant. For example, the festival held in Hirosaki Park is called “Hirosaki Sakura-Matsuri.”

Unfortunately, there is no set time or date for these festivals, as they depend on the trees’ bloom cycle. Most commonly, sakura bloom in Spring, which is generally between March and May. However, this is highly dependent on climate; sakura bloom earlier in warmer conditions, and therefore they often begin to blossom in the subtropical island of Okinawa in January.

Because the climate of Japan becomes milder the farther north one goes, the northernmost parts of the country have the latest cherry blossoms. Although the bloom of the cherry blossoms cannot be predicted with one hundred percent reliability, the JNTO forecast map provides data on the expected progress of the blooms. Considering this, it is absolutely possible to follow the cherry blossoms as the blooms make their way north.

Although celebrations are held throughout Japan, some festivals are larger and more well-known. If you plan to visit Japan for the first time to see one of these events, make sure to take the time to prepare for your trip.

Home to the historic Hirosaki Castle, Hirosaki Park in the city of Hirosaki (Aomori prefecture) hosts a popular cherry blossom festival. Located in northern Japan, Hirosaki Sakura-Matsuri is one of the later celebrations. Beyond taking place in a cultural and economic center, the backdrop of historical architecture adds even more charm to the already beautiful event. 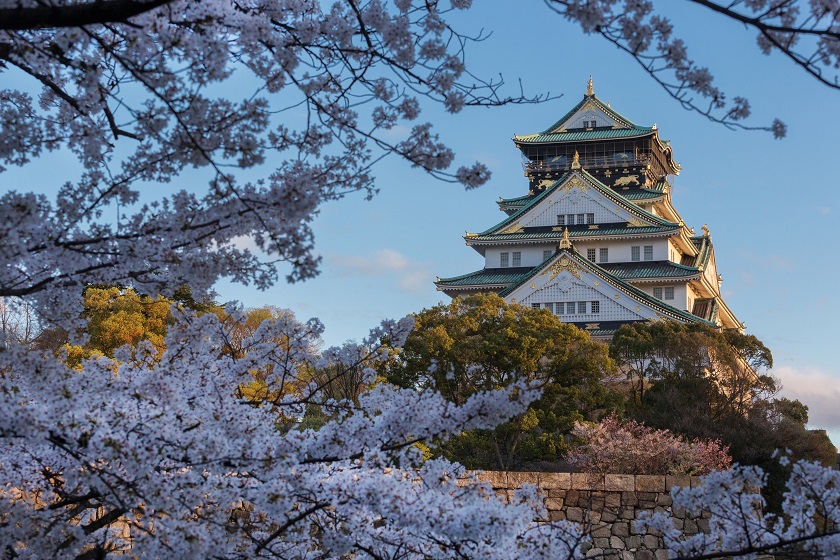 Stretching through two wards (Shinjuku and Shibuya) of the Japanese capital, Tokyo, Shinjuku Gyo-en National Garden is a 144-acre national park in the middle of Japan’s busiest metropolis. Shinjuku Gyo-en is uniquely composed of gardens in traditional French, English, and Japanese styles, each comprising a different area of the park.

While prominently displayed, the park’s cherry blossom trees only account for 1,500 of the park’s 20,000 trees. Additionally, the park’s greenhouses house almost 2,000 tropical and subtropical plants. Fitting for the country’s capital, hanami held in Shinjuku Gyo-en are especially remarkable.

Also found in Tokyo, Ueno Park is located in the Taitō ward of the metropolis. Ueno Park is Japan’s most popular city park. Beyond being home to approximately 800 cherry blossom trees and many species of bird, the park also boasts many museums and shrines. Some sakura found in the park are known to bloom earlier than other varieties in Tokyo.

Mitsuike Park is located in Yokohama, Japan’s second most populous city. This park is a more simple wonder than other popular hanami spots, mostly comprised of walking trails and ponds. However, it is remarkable in that the park’s collection of sakura represent about 80 species of the tree, many of which bloom at different times of the year. This extends the usually very short window for hanami. 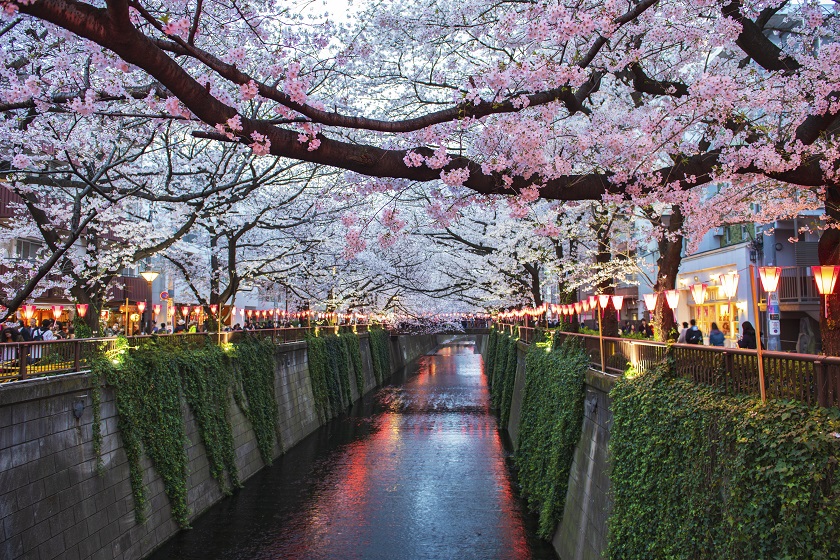 Meguro River winds through approximately five miles of Tokyo. Over half of a mile of its bank is adorned with cherry blossom trees, and the paper lanterns arrayed along the waterway make it an ideal place to enjoy yozakura as well. Additionally, the riverside is dotted with museums and restaurants, which allow those enjoying hanami to particularly indulge in the party aspect of the tradition, as well as peaceful viewing.

For further reading see:
Visiting Japan to view the Sakura in 2020