Whether you enjoy the occasional dram or you’re a serious whisky connoisseur, Japan is a must-visit destination for fans of the iconic spirit, with unique distilleries and bars to rival anywhere in the world. For many, the classic scene in Sofia Coppola’s Oscar-winning film, Lost in Translation, where Bill Murray raises a glass to ‘Suntory Time’, may have been their first introduction to the world of Japanese whisky. However, for serious whisky lovers, Japan has been at the very top of the list for several decades, both for the quality of its produce and the spectacular and unique locations of its distilleries – many of which are open to the public, easily accessible by domestic rail, and host special tasting tours for visitors to the country.

What makes Japanese whisky so special? And why is Japan such an incredible place to visit for whisky lovers? Experts say it is the purity of the water, which is often taken from snow melt, from Mount Fuji or the Southern Japanese Alps for example, or from spring water, combined with the clean air, mineral-rich soil, and warmer climate (as opposed to Scotland or Ireland) thanks to the country’s geographical position, all of which results in a unique flavour profile. Either way, Japanese whisky is distinct, special and has been winning global awards for its quality for decades including The Whisky Bible’s coveted Best Whisky in the World award. The premium, aged varieties also have a reputation for being increasingly hard to find, making them highly collectible, due to shortages caused by the high demand internationally since the popularity of Japanese whisky skyrocketed among knowledgeable drinkers around the world. Of course, it is not just drinking Japanese whisky that makes it special, but where it is produced and the opportunity to easily visit these incredible locations. With several distilleries just a short train ride from Tokyo and others in eye-popping locations, such as the Mars Shinshu distillery, which is 2,600ft above sea level in snow-capped forests, Japan is a must-visit country for whisky lovers.

3. A brief history of Japanese Whisky 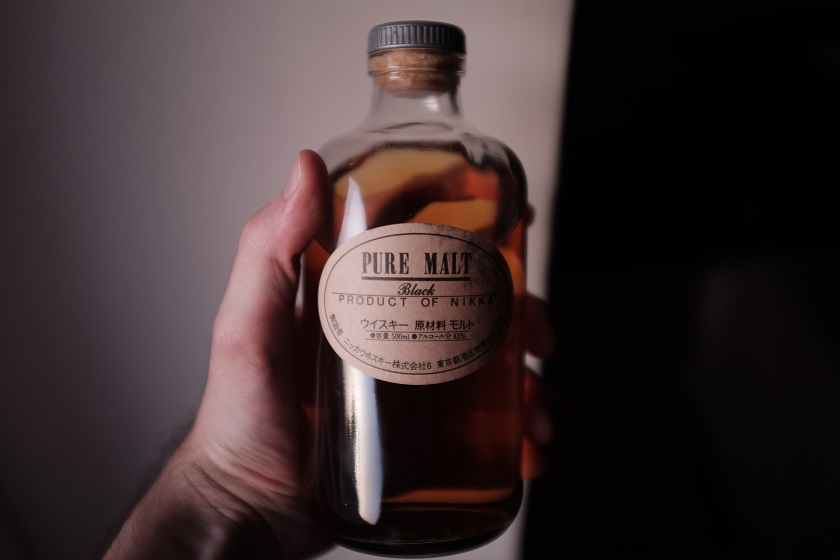 The history of Japanese whisky may not be as long and storied as Scotland’s love affair with single malt or America’s relationship with bourbon and rye, but it is an equally fascinating story that reads like the plot of an Oscar-winning film itself. We can’t see Bill Murray being cast this time though. Depending on the version of history you subscribe to, whisky was either introduced to Japan by American commodore Matthew Perry in 1854 as a gift to the emperor and an attempt to end the country’s 220-year policy of isolationism, or slightly later after the end of the feudal era in the Meiji period. However, in terms of Japan actually producing its own whisky, it is a much more recent story. For the most part, Japan’s whisky heritage is entwined with the history of two rival companies, Nikka and Suntory, and the respective founders of each business – Masataka Taketsuru and Shinjiro Torii. In particular, it’s Taketsuru’s story which unfolds like a Hollywood movie. He travelled to Scotland as a young man and enrolled at Glasgow University, determined to discover the Scottish secret to producing whisky. His quest led him to track down a famous Scottish whisky master, JA Nettleton, and undertake several internships at distilleries across the Speyside area and beyond. It was during this time that Taketsuru met and married a Scottish woman, Jessie Roberta (or Rita as she was known), and together they returned to live in Japan. Didn’t I say it was like a Hollywood story? On his return to Japan, Taketsuru took a job at Suntory’s Yamazaki distillery, which was founded and led by Shinjiro Torii, who had himself been trying to perfect whisky and introduce it to Japan for several years. Torii had used his family fortune to create Japan’s first whisky distillery. When Taketsuru finally went into business for himself, he named his company The Great Japanese Juice Company, but today it is known as Nikka, one of Japan’s biggest whisky brands, alongside Suntory. The two companies may be rivals, but as you can tell from the brief history above, they are closely connected, and today, Taketsuru and Torii are regarded as the founding fathers of Japanese whisky. Both companies enjoyed considerable success with their whisky after the end of the Second World War when whisky drinking became an essential part of Japan’s western makeover. Since then, the country’s distilleries have gone from strength to strength into the whisky powerhouse they are today.

Nikka and Suntory are Japan’s biggest producers of whisky and have several distilleries across the country, but there are also a number of smaller, more alternative whisky producers whose operations are well worth a visit too. Scotland and Kentucky, USA, might outnumber Japan for volume, but we don’t think any country can rival Japan for the beauty, uniqueness and must-visit locations of its distilleries. Here is a selection:

Yoichi (Nikka)
Surrounded by mountains and the sea, and founded in 1934, Yoichi distillery’s cold, coastal location was specifically chosen by Masataka Taketsuru to replicate the Scottish Highlands and is said to imbue its whisky with a similar flavour profile to an Islay scotch whisky.

Miyagikyo (Nikka)
A picturesque distillery located in the mountains near Sendai City in northern Japan. Miyagikyo is surrounded by forests and features a landscaped Japanese garden in a traditional style. You can reach Miyagikyo from Sendai Station via the JR Senzan Line to Sakunami Station in about 40 minutes.

Hakushu (Suntory)
Easily one of the most beautiful distilleries to visit in all of Japan, Hakushu can be found in the forested mountains of the Southern Japanese Alps, approximately two and a half hours west of Tokyo by train. You will want to get off at Kobuchizawa Station on the JR Chuo Line and take a taxi from there.

Yamazaki (Suntory)
The godfather of Japanese whisky distilleries. A 15-minute train ride from Kyoto, Yamazaki was founded in 1924 by Suntory’s Shinjiro Torii and boasts a whisky library with more than 7,000 catalogued bottles. Here, Suntory keep a bottle of every whisky they have ever produced to ensure they are able to maintain the original flavour profiles. Whisky lovers from all over the world travel to visit Yamazaki distillery and for good reason. 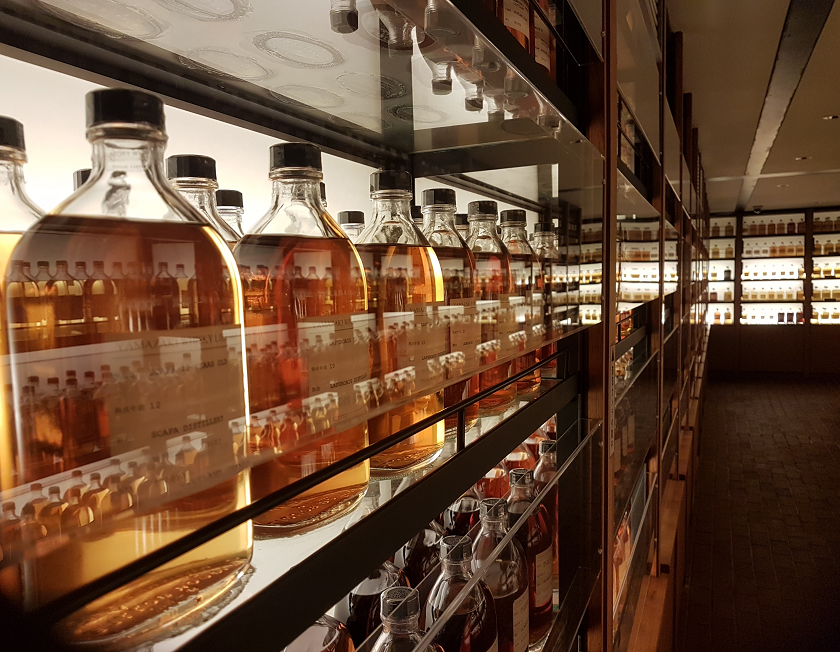 Mars Shinshu (Mars)
Situated at altitude (2,600ft) in a stunning wooded area and blanketed with snow in winter, this unique distillery stands out on the list for its location alone and has a history dating back to the 1940s.

Onishi (Onishi)
Located on the Kuma River, Onishi is known for (unusually) using two different types of rice, rather than the traditional methods, to distil its whisky.

Fuji-Gotemba (Kirin)
Just two hours from Tokyo and located at the base of the beautiful and iconic Mount Fuji with its pure water and mineral-rich soil, this distillery is owned by Kirin and was founded by a partnership between Seagram’s, Chivas Brothers and Four Roses.

A list of all the world-class Japanese whisky would be a whole blog post itself, but here are six special bottles to look out for. 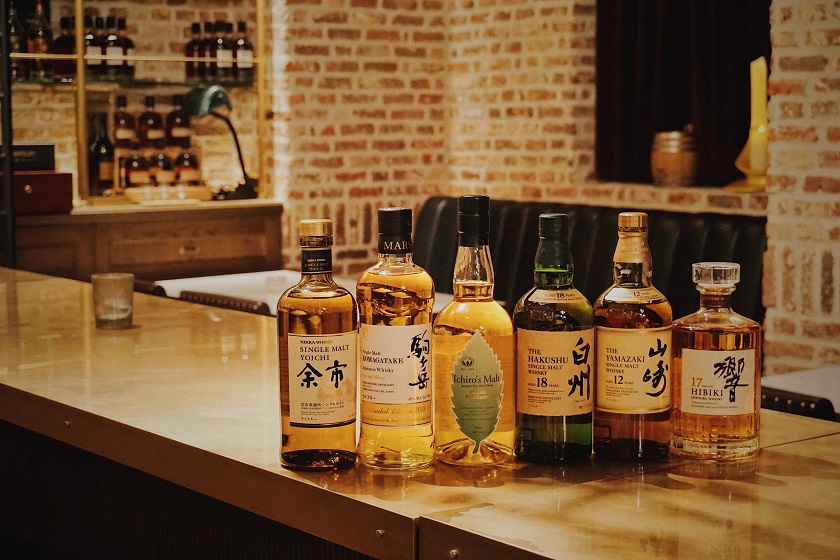 The Yamazaki Sherry Cask – how could we overlook the whisky voted the best in the world by The Whisky Bible? This blend is married in casks that previously held Oloroso sherry for three years raisins, clove and chocolate. Alternatively, try Yamazaki 12 which is regarded as the quintessential Japanese whisky. 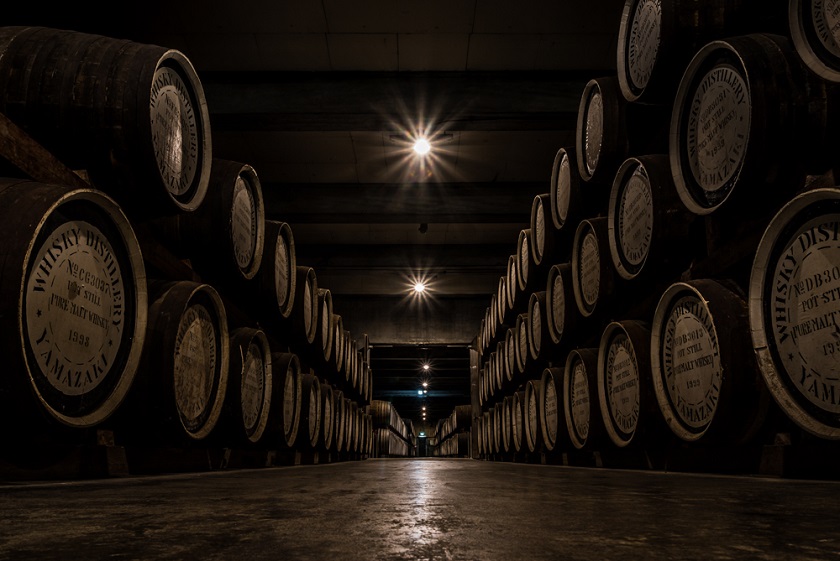 Nikka Coffey Malt Whisky – this has nothing to do with ‘coffee’ and everything to do with Aeneas Coffey, an Irishman who perfected a variation of the whisky ‘still’. Named in his honour, this whisky is made from 100% malted barley and has a bourbon-like flavour profile.

Hibiki 21-year-old – winner of the world’s best blended whisky at the 2013 World Whisky Awards. Blending is one of the most important techniques in the craft of Japanese whisky making and this is one of the finest examples you will find anywhere.

Yoichi Single Malt – Smoky, peaty and coal-fired, this single malt is produced at Yoichi and is Japan’s answer to Scotland’s famous Islay whisky.

Chichibu Port Pipe – founded in 2008, Chichibu are ‘new kids on the block’, but they are making a big name for themselves and this single malt aged in former port barrels is one to look out for. The company is set to release a new 10-year old whisky for the Tokyo 2020 Olympics. You can find out everything you need you to know about the 2020 Olympics in our free JR Pass Tokyo 2020 Olympics Introductory Guide.

Ohishi Single Sherry Cask – Uniquely made from two different types of rice (gohyakumanishi and mocha) and aged in sherry casks, this is a non-traditional whisky that is more like a Japanese rice wine but is well worth a try.

Like most spirits, Japanese whisky can be enjoyed on the rocks, neat (known as ‘straight’ in Japan), or with a splash of water (mizuwari) which is often the preference for fans of traditional Scottish single malts or high-quality American bourbons too. However, there are some uniquely Japanese ways of enjoying whisky. For instance, oyuwari, which is whisky with hot water. The highball – basically whisky served with ice and carbonated (sparkling water) in a tall ‘highball’ glass – is also hugely popular in Japan, so much so it available everywhere from izakaya to hotels, restaurants and convenience stores.

You may not be able to visit Japan right now, but that doesn’t mean you can’t enjoy two of its most famous exports - Manga and Anime.

If you’re visiting the beautiful country of Japan during the rainy season, it’s helpful to know what to expect and how to get the best from your trip.