Japan has reopened! We are back to full service![x]
Cookies are not enabled on your browser. Please adjust this in your security preferences before continuing.
Back to blog

Why You Should Visit the Sumiyoshi Taisha Shrine of Osaka

The ancient Sumiyoshi Taisha Shrine of Osaka is one of the most important shrines around Osaka and setting for the Hatsumode festival.

Although Osaka isn’t as well known for its temples and shrines as Kyoto and Tokyo, it is home to the famous Sumiyoshi Taisha shrine. Found in the south of Osaka, this ancient shrine is Osaka’s most important due to its deep history, authentic architecture and connection to the busy Hatsumode festival. Also known as the Sumiyoshi Grand Shrine, this fascinating attraction is a treat for tourists interested in learning more about Shinto and seeing its pretty scenery.

Read on to learn more about Sumiyoshi Taisha and see why it’s belongs among the ranks of the most important Shinto shrines in Japan.

The History of Sumiyoshi Taisha 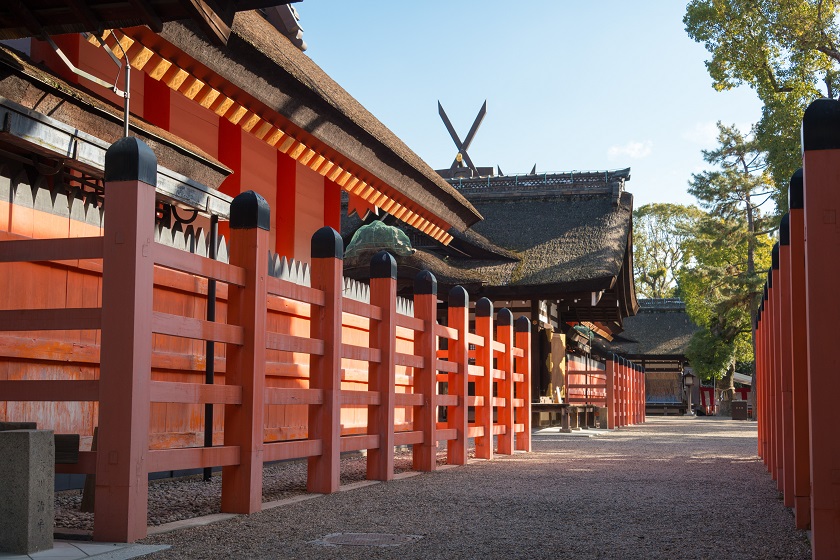 To understand why you should visit Sumiyoshi Taisha, it really helps to know the importance of the shrine and the history related to it.

The Sumiyoshi Taisha is believed to have been founded in the 3rd century, meaning it easily predates the arrival of Buddhism in Japan. As such, it bears a design that is authentically Japanese, following the ancient style of shrine architecture called sumiyoshi-zukuri. Despite its grand heritage though, this is not the oldest Sumiyoshi shrine in Japan, as that honour belongs to the Sumiyoshi Shrine in Hakata.

Speaking of other Sumiyoshi shrines, there are actually roughly 2,300 of these Shinto shrines across Japan. And while not the oldest, the Sumiyoshi Grand Shrine is widely considered the most important among them. Sumiyoshi shrines were typically built to pray to kami, essentially Shinto spirits, that related to the sea. As such they were built by harbours and the sea to protect sailors and fisherman out on the water.

Since Sumiyoshi Taisha is found a ways inland, it might seem strange that it is a shrine for sailors, fishermen and travellers. But the coastline has moved quite a distance since it was first built and used to overlook the water.
You can tell just how important this shrine is by the fact that it’s mentioned in major pieces of Japanese literature. Sumiyoshi Taisha is featured in the world’s first novel, the Tale of Genji, from the early 11th century, as well as in novels by Nobel Prize winner Yasunari Kawabata.

Being an important religious site, it’s little surprise that Sumiyoshi Taisha is tied to a Japanese festival. But the Hatsumode festival held from January 1st to 3rd each year is no ordinary festival. Hatsumode, when people make their shrine visit for the year, is a major part of celebrating the New Year in Japan. Over just three days, this shrine will see over 2 million visitors which is hard to fathom without experiencing it in person yourself.

Sightseeing at the Sumiyoshi Grand Shrine 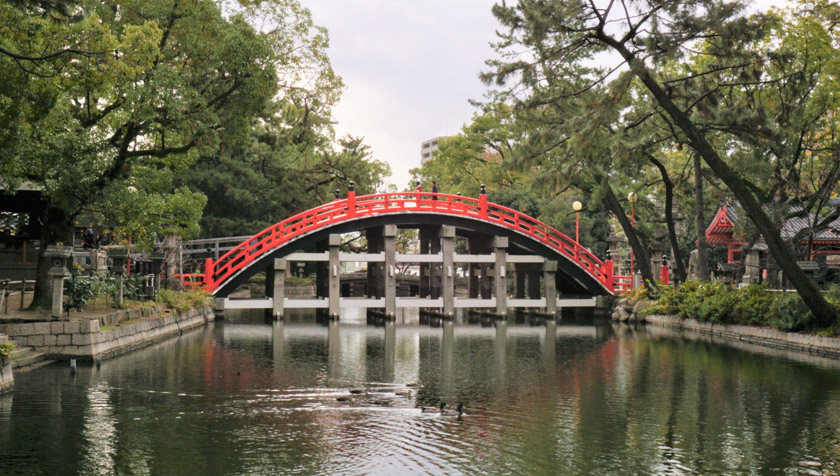 With a visit to the Sumiyoshi Grand Shrine you’ll spend most of your time here sightseeing the main buildings and structures throughout its pleasant grounds. As you move about you’ll see examples of the sumiyoshi-zukuri architectural style, with its straight thatched roofs and red and white colour scheme.

While there are many structures that fill the shrine’s complex, the most important are the four main halls. These four buildings are dedicated to the three kami of the sea, as well as the spirit of the Empress Jingu, a legendary ruler from the time the shrine was founded. Each of these buildings exhibits the sumiyoshi-zukuri style, even though they are ritually dismantled and rebuilt as part of a cycle of renewal common in Shinto. The current formation dates back to 1810 when they were last rebuilt.

Possibly the most beautiful sight at the Sumiyoshi Grand Shrine though is the Sorihashi Bridge. This bridge and its curiously high arch makes quite an impression as it brings you into the shrine near the entrance. Sorihashi Bridge is said to be around 400 years old and was built to cross an inlet, now simply spans a pond. Fair warning, this bridge is seriously steep so take your time coming down the other side.

Getting to the Sumiyoshi Grand Shrine is relatively straightforward with Osaka’s public transport. Unfortunately though, none of the options are covered by the JR Pass. To get there, travel from Namba Station with either the Nankai Main Line to Sumiyoshitaisha Station or the Nankai Koya Line to Sumiyoshi-Higashi Station. Do note though that Sumiyoshitaisha Station is much closer to the shrine and only a few minutes walk away.

Whatever time of year you’re visiting Japan, the country’s famous snow monkeys are a must-see attraction -and where better to visit than the famous Jigokudani Monkey Park, where they can be seen bathing in the outdoor hot springs.

With the Miho Museum you can witness ancient art and antiquities from Japan and the West inside a world class architectural landmark.