Visiting the Mazda Museum in Hiroshima

The city of Hiroshima in Japan is a common destination for international visitors due to its heartbreaking history. But there’s one side of the city many tourists may not be aware of and it related to the car manufacturer Mazda. Hiroshima is actually the home to the global car brand, with the Mazda Museum in Hiroshima a celebration of this deep bond between the two. A visit to the museum is one of the best free things to do in Hiroshima, even if you’re not much a car person.

Here’s why you should make the time to visit the Mazda Museum when in Hiroshima, especially when travelling about with the Japan Rail Pass.

A Brief Background to the Mazda Museum

At first glance it may seem for Hiroshima to have a museum fully dedicated to Mazda, but the car company has deep roots in the city. The Mazda Motor Corporation was founded in Hiroshima in 1920, first starting out by selling a three-wheel autorickshaw. Obviously, the company grew and expanded over the decades and was an essential part of the city’s economic growth.

To this day, Mazda has kept their global headquarters and factories in Hiroshima, occupying a lot of land along its waterfront. Just to give you a sense of how important the tie is between Hiroshima and Mazda, the name of the city’s baseball stadium is Mazda Zoom-Zoom Stadium Hiroshima and there’s even a Mazda Hospital. The museum, which is near the headquarters, first opened in May 1994 and has been expanded since.

What to See on the Mazda Museum Tour 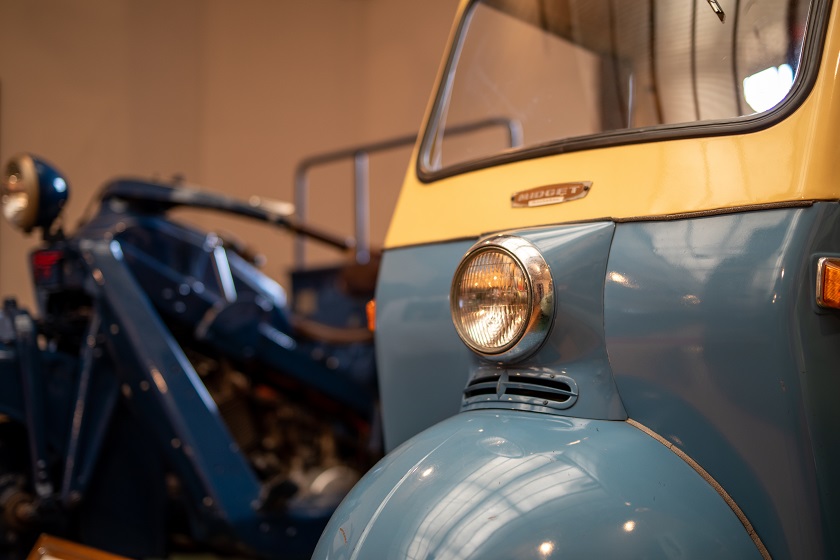 Tours of the Mazda Museum typically take around 90 minutes and introduce visitors to the history, technology and future of the company. After signing at the front desk, the tour begins with a bus ride over to the museum on the factory grounds.

The first exhibit focuses on the history of Mazda, exploring the evolution of its creations over the years starting with its first autorickshaw. Here and throughout the museum you’ll get to see actual models of these vehicles up close. There’s even the 787B that Madza used at the Le Mans in 1991, becoming the first Japanese manufacturer to win the famous 24 hour race.

After that, there are two rooms that focus on the technology behind its rotary engine and the manufacturing process. These sections are important as they lead into the U1 Assembly Line where you actually get to see cars actively being assembled in front of you. While you’ll only see a small section of the assembly line, in total it stretches for 7 km (4.3 miles). Many consider this stop the highlight of the tour and it’s easy to see why.

Next is an exhibit that looks to the future, showcasing the kind of developments Mazda has planned for their next-gen models. As these are just concept models, they’re updated quite regularly which means you’re usually seeing the current direction of the company.

Naturally, the tour ends with the gift shop where you can get your souvenirs, including plenty of model cars.

Tips for Visiting the Mazda Museum

Visiting the Mazda Museum with the JR Pass

Getting to the Mazda Museum is quite easy for those travelling to Hiroshima with the JR Pass. Taking either the JR Sanyo Line or JR Kure Line you can get from Hiroshima Station to Mukainada Station quite quickly and use your pass the entire way. Combining the Sanyo Shinkansen with the JR Sanyo Line you could even choose to visit the Mazda Museum from Osaka if you really wanted.

Japan’s plum blossoms are just as beautiful as the famous sakura, despite being lesser known. If you want to avoid the crowds and expense of Japan during cherry blossom season.

For lovers of gorgeous autumn weather, winter illuminations, and hearty food, it doesn’t get much better than November in Japan.

The Olympic Torch Relay brings the spirit of the games to corners of the country far beyond the main city of the games.