Seafood is a major part of Japanese cuisine which is why so many travellers are interested in going straight to the source on their trip. In Tokyo that used to mean heading for the famous Tsukiji Fish Market where you could see seafood sold at its wholesale market and eat fresh seafood at its many stalls. Now though, you’ll need to visit Toyosu Market near Odaiba in the Kōtō ward for all that.

Within this large market complex, tourists are able to witness lively auctions, see all manner of produce be sold and treat themselves to some delicious seafood. Here’s how to make the most of the Toyosu Market when travelling in Tokyo and Japan with a Japan Rail Pass.

History of the Toyosu Market

The Toyosu Market may have only opened on October 11, 2018, but there’s a great deal more to its history than just that. This huge market complex was constructed after years of planning to replace the aging yet insanely popular Tsukiji Market. Tourists loved visiting the old Tsukiji Market because of its famous tuna auctions, where fresh-caught tuna was sold for staggering sums of money.

However, the Tsukiji Market was getting on in years, having started in 1935 as a replacement itself for an older market destroyed by an earthquake. The city of Tokyo decided to therefore shift the fish market to the new Toyosu Market, which is only 2.4 kilometres away from its predecessor. In the move, the inner fisher market and many of the restaurant stalls shifted over, but much of the surrounding outer market is still operating as normal.

One of the other claims to fame of the Tsukiji Market was its sheer size. It used to hold the title as the largest wholesale fish and seafood market in the world. Now with the Toyosu Market, which is almost twice its size, that title has shifted over to the new market as well.

What to See at the Toyosu Market 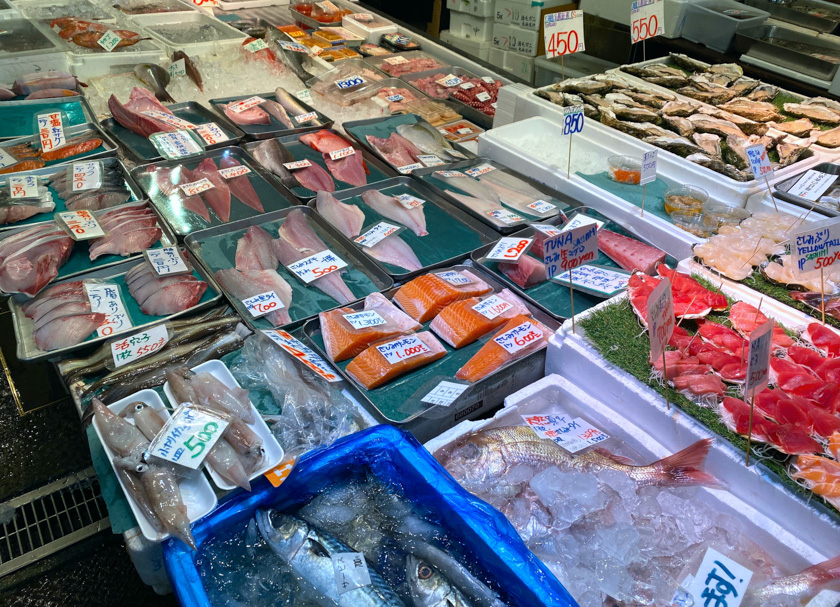 Of the three main buildings in the Toyosu Market, the most important is generally the Fish Wholesale Market building. That’s because this is the part of the market where the iconic auctions take place, with one hall dedicated to tuna auctions and the other for other seafood auctions.

In the tuna auction area, buyers will bid extreme amounts to beat out their competition for large, freshly-caught bluefin tuna. This early morning activity typically runs from 5:30am to 6:30am and is quite a lively scene.

While visitors are unable to be down on the market floor for all this, they have two options for watching the proceedings. One option is the observation windows of an upper-floor galley that features information boards on the market and specifics like the hand gestures used during the auction. The other option is the special observation deck on a lower level that lets you more directly experience the action.

The other two buildings of the market are where the stalls and vendors are actually set up. One building is the Fish Intermediate Wholesale Market building, where each of the wholesale vendors have their shops setup and seafood on display. Seafood isn’t the only thing on the menu at Toyosu though, as the final building is dedicated to a wholesale market of fresh fruits and vegetables.

Again, visitors aren’t permitted down among the vendor stalls, instead having to remain content with the views from more observation windows.

Back in the days of the Tsukiji Fish Market, a big part of visiting the market was heading to the stalls in its restaurant area. There you could try all sorts of seafood dishes prepared with fresh seafood, including of course, sushi. That tradition was also transplanted to Toyosu and many of the former restaurants of the Tsukiji inner market now operate at the new market as well.

The largest collection of food stalls is found up above the market in the Fish Intermediate Wholesale Market building. There you have around 40 stalls, including some very popular sushi restaurants. There are actually plans for a new building at the market called Senkyaku Banrai, which will feature more dining options as well as possibly the chance to purchase fresh seafood there yourself. However, this addition has been delayed until spring 2023 at this stage.

Tips for Visiting the Toyosu Market

Visiting the Toyosu Market with the JR Pass

Learn how to activate the Japan Rail Pass at Sapporo station, where to go, opening hours and where to reserve tickets.

The chance to witness the spectacle of the Olympic Games in person is a once in a lifetime experience. But combining the Olympics with a trip around Japan makes the whole experience even more special.

Winter can be a tricky time of year to visit Japan if you’re not into skiing and snowboarding. The Sapporo Snow Festival make it completely worthwhile the glacial spectacle and snow fun.