Cities like Osaka and Kyoto are common stops on many travellers’ Japan itinerary, but few realise the wealth of destinations and attractions that lie just within reach across the Kii Peninsula. Found to the south of Osaka, the Kii Peninsula offers a variety of places to visit that could easily keep you entertained for your entire trip to Japan.

Across its mountainous terrain you can visit countless wonders, from some of the country’s most sacred religious sites to white sand beaches and even one of the best spots for cherry blossom viewing. Seriously, the best places to visit in the Kii Peninsula will knock your socks off, because visiting the Kii Peninsula let’s you see what Japan does best all in one place. 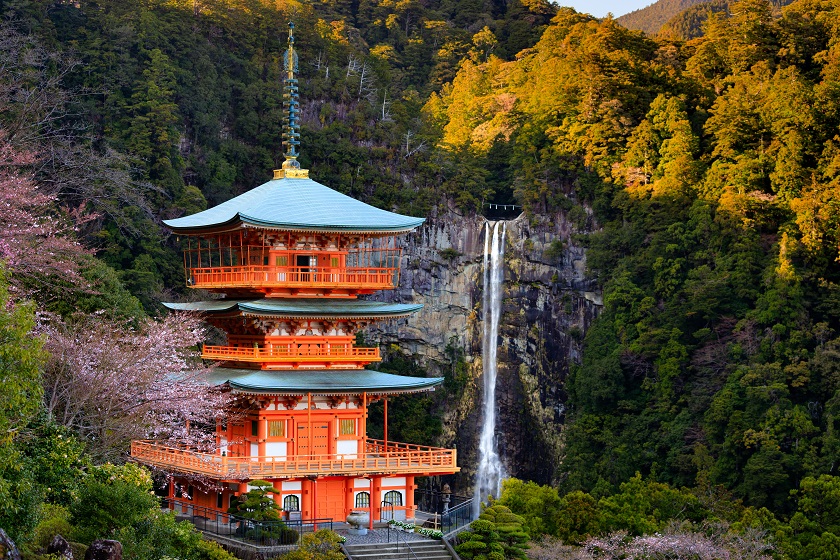 Perhaps the most famous group of landmarks on the Kii Peninsula is the three grand shrines of the Kumano region known as the Kumano Sanzan. Made up of the Kumano Hongū Taisha, Kumano Nachi Taisha, and Kumano Hayatama Taisha, these Shinto shrines are incredibly sacred and a common pilgrimage destination.

Hidden away in the forests near the southern end of the peninsula, the three shrines are connected by the ancient pilgrimage trails of the Kumano Kodo. This means that visiting the Kumano Sanzan isn’t just for those interested in Japan’s spiritual side, it’s also perfect if you want the country’s natural side. You even have the chance to witness one of Japan’s most breathtaking waterfalls, Nachi-no-taki, when you stop at Nachi Taisha shrine.

Speaking of Shinto shrines in Japan that you can’t miss, you’ll want to make sure that the Ise Grand Shrine is well and truly on your radar. Believed to have been built 2000 years ago to the sun goddess Amaterasu, the Ise Grand Shrine is one of the country’s most sacred. That’s despite the fact that Ise City is said to have 123 other Shinto shrines in or near the city.

Part of what makes the Ise grand Shrine so fascinating is that it goes through its own cycle of rebirth. Every 20 years this shrine is torn down and rebuilt with traditional techniques in a ritual called Shikinen Sengū. The complex consists of two temples, the Inner Shrine and Outer Shrine, with the Inner Shrine the more important despite its humble appearance. 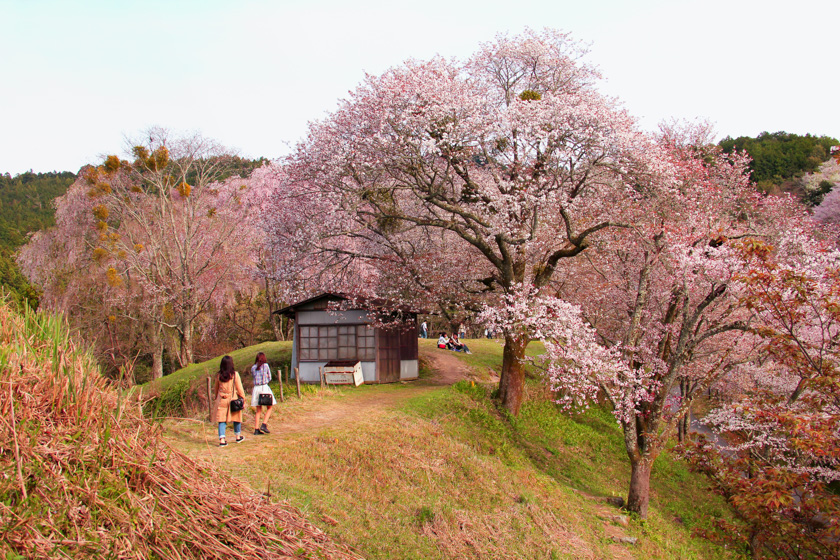 Wherever you are in Japan it’s good to know the best cherry blossom spots and on the Kii Peninsula, the top honour goes to Mount Yoshino. Arguably the most popular cherry blossom viewing spot in the whole country, legend says that the first cherry trees were planted on its slopes over a thousand years ago. Today there’s quite a few more than that, with over 30,000 cherry blossom trees that draw big crowds when they bloom each spring.
Beyond its cherry blossoms, Yoshinoyama also has its fair share of hiking trails, temples, shrines, not to mention a ropeway gondola that will help you enjoy its mountain scenery. 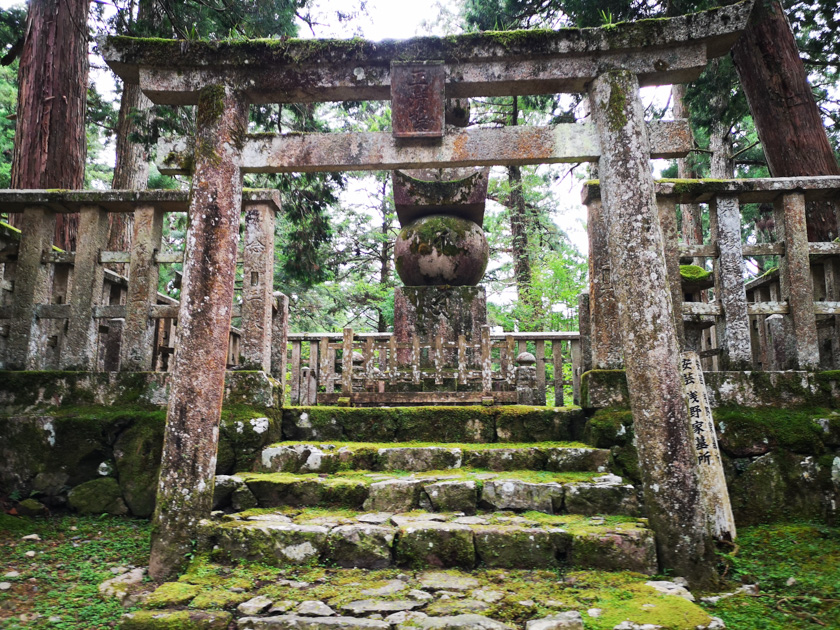 Another wonderful mountain destination you can find on the peninsula is Mount Koya or Koyasan. But what makes Mt. Koya so special is actually the temple complex that dominates its wooded mountaintop. 800 metres above sea level, this temple town is the heart of a sect of Buddhism known as Kōyasan Shingon.

One of the most important temples here is Danjo Garan, which has been a centre of religious teaching since the 9th century. If you’re lucky you might even spot some current students walking around in their yellow robes. Sights to see there include the freshly-renovate Chūmon gate and the bright red Konpon Daitō pagoda.

Another major temple is the Oku-no-in sanctuary, home to a cemetery of 200,000 tombs and the mausoleum of Kōbō Daishi, the founder of Shingon Buddhism. There in the forest you’ll find many stupas covered in moss and an air of tranquillity and reverence.

It’s worth understanding that the Kii Peninsula isn’t just all forests and mountains, it also has some superb beaches like the ones around the resort town of Shirahama. Situated right by the southern edge of the peninsula, this is where you should go if you’re craving white sand beaches. The name Shirahama actually translates as “white sand” and that’s exactly what you get at its main beach. Beyond its beaches, Shirahama also boasts several hot springs and one of Japan’s oldest onsens. Rest and relaxation is definitely on the cards with a visit here.

When to Visit the Kii Peninsula 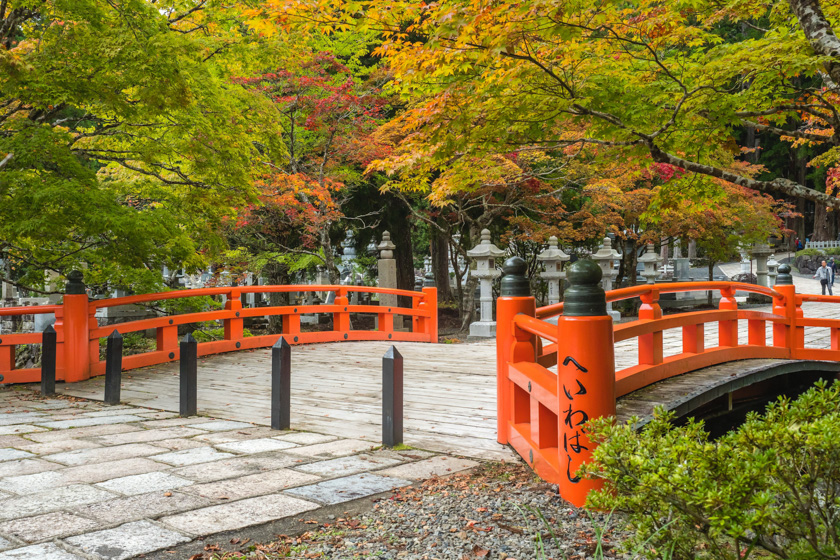 As fun as it can be to explore the Kii Peninsula, you’ll want to do your homework when planning your visit. The area is known as being part of the wettest region in the country, as well as being one of the most vulnerable to typhoons. Therefore, you probably don’t want to plan a visit during Japan’s typhoon season which runs from June to October and is at its strongest during July and August.

Getting to the Kii Peninsula with the Japan Rail Pass

Thanks to its location relatively close to major cities like Osaka and Kyoto, you’ll have no problem reaching the Kii Peninsula with the Japan Rail Pass. Trains connect cities and destinations right around the peninsula, but you’ll need to check individual places to see how they’re serviced. If you’re only sticking to the peninsula, it may be worth looking at JR West regional passes to see if any will cover everywhere you want to go.

Here's what you need to know about visiting the Rugby World Cup 2019 in Japan. Learn about the venues, how to get around and more.