Halloween, much like Christmas in Japan, is a relatively new holiday, but it is becoming increasingly popular. For fans of anime, cosplay, and manga culture, this holiday is a time to show off costumes and creativity.

In 1997, Tokyo Disneyland introduced Halloween to Japan, and became increasingly popular every year until it became an annual event. In 2002, Universal Studios Japan joined in the festivities. The two major theme parks were instrumental in bringing Halloween to Japan.

Though the concept is the same, there are some differences between the Japanese and American versions. First, the Japanese don’t focus on trick-or-treating like Americans do. This is because of the difference in culture — Japan frowns upon anything that would bother other people. Instead, Halloween is a time for adults to dress up and party.

Additionally, Japan does not view Halloween as a time when spirits are able to walk the Earth. They have their own holiday focused on spiritual reconnection called the Obon Festival. This festival is a Buddhist tradition that has been celebrated for over 500 years.

Though Halloween is celebrated differently in Japan, it is still enjoyed for many similar reasons.

Visitors will find a vast array of costumes on Halloween. They can either be the standard zombie, vampire, or witch, or they can be mystical Japanese spirits, ghosts, and gods from Japanese lore.

Instead of trying to scare others, the Japanese focus on the fun of costume making and role-playing, also known as “cosplay.”

Cosplay is one of the main reasons Halloween grew quickly in Japan. It allows those that enjoy dressing up a chance to do so outside of conventions.

Many people define cosplay as performance art. After World War II, girl comics, or “shojo,” helped develop an interest in cosplay through full-body fashion illustrations. Soon, shojo manga became a fashion magazine as well as a storybook. Girls could purchase clothing that matched their favorite characters, and started writing fan-driven character identities and alternative storylines, which, when combined with fashion, became important creative factors for cosplay.

America was also getting into cosplay after WWII. In the 1960s, the famous show Star Trek sparked a heightened cultural interest in science fiction, and fans started dressing up at conventions. Nobuyuki Takahashi, a Japanese film director, impressed by the cosplayers, brought the idea back with him to Japan and encouraged convention attendees to start dressing up. He called it, “kosupure,” or costume-play.

For cosplayers, dressing up is more than the simple donning of a costume. In a study done by clinical psychologists Dr. Robin S. Rosenberg and Dr. Andrea Letamendi, a quarter of cosplay respondents chose their costumes based on some psychological characteristics. When asked why, 37% of respondents said cosplay is a vehicle for creative expression.

There is also a community aspect of cosplay. In the same study, 43% of respondents said they cosplay with others two to five times a year. Competitions and events in costume allow cosplayers to interact in a safe environment with others who share their interests.

It isn’t hard to find a Halloween party in Japan, but there are some main events to look out for.

The Ikebukuro cosplay festival includes parades, runway events, and photoshoots. It is a two-day event and is held in Toshima Ward, Tokyo. In 2018, the event saw over 20,000 cosplayers and 105,000 visitors.

Tokyo Disneyland starts its Halloween celebration on September 9 and goes until October 31. However, if visitors wish to partake in the festivities, there are rules to follow.

First, cosplayers must dress up like Disney characters, for which a list of appropriate characters is provided. Second, no weapons or heavy makeup is allowed, or any simulated injury that could be mistaken as real. Third, no overly-revealing costumes are allowed, and, lastly, patrons cannot change clothes or touch up makeup in the park’s bathrooms.

The Hello Halloween Pumpkin Parade is hosted in Omotesando and spans almost a mile along the city’s streets. It is an annual event in late October for children under 12 to dress up for. Local shops also participate in the parade and give away sweets to the children. Many cafes and restaurants will have Halloween-themed menus for the whole month of October. 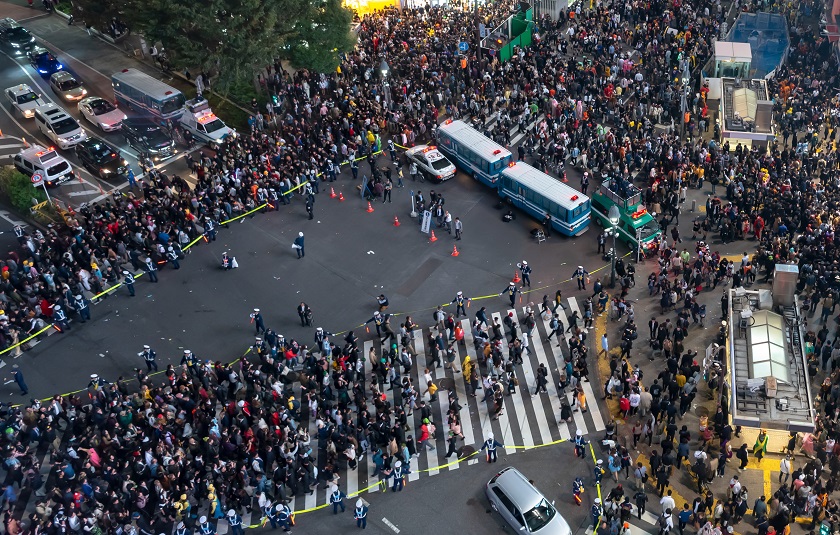 Many Halloween revellers take to the streets to throw massive parties. Street parties are free and party-goers can bring their own drinks. One popular spot is the Shibuya street party in Tokyo. In 2015, around 70,000 people visited the district during Halloween, and the numbers have grown since.

Another popular spot is the Roppongi Hills. This parade, held on October 27, is themed, allowing anyone who follows the theme a chance to participate.

During Halloween, the subways in Tokyo turn into rowdy places to celebrate. Aptly named Halloween Trains, these moving parties started in the 1990s when visiting Americans would spontaneously hold parties in random cars. After being disbanded in 2009, they returned in 2012 better organized. Today, two subways, the Yamanote Halloween Train and the Osaka subway hold annual Halloween parties on their subway lines.

And most importantly, whether it’s a party on a train or a parade in Tokyo Disneyland, dressing up is a must!