A quick history of 1st class train travel in Japan.

Recently one of our customers asked, why are first class carriages in Japan called “green class” and not first class or business class like elsewhere in the world? Let’s find out.

For those new to train travel in Japan, Green Class is the more luxurious way of travel in Japanese trains. There’s more leg room, your seat reclines more and there are extra services available depending on the train, such as a special Green Class attendant, “Oshibori” hand cleaning towels, complimentary drinks (coffee/tea/water) and more.

Green Cars on local trains such as the Joban line in Tokyo have a special attendant provide a vending service and check your tickets at the same time (nothing beats Japanese efficiency). Green Class is also frequented a lot less than ordinary train cars making it a great option for travelers who wish some peace and quiet.

Historically, first class was just called just so on Japanese limited express train. In 1969 it was changed to Green Class or Green Car. While we don’t know exactly why this was changed, there are two theories. The most popular theory is that Green Class is named after the pale green line that was drawn on outside of the train car designated as the first car, this way it was easy to recognize before boarding. The other theory is that Green Class was named after the green marks that were placed on the headrests of first class seats to designate them as such. Whatever the reason may be, Green Class is now universally used in Japan and can now be found in other types of transport as well.

The logo for Green Class is a four star clover (see image at the top), this was chosen to represent good fortune and give Green Class travelers an added feeling of joy. 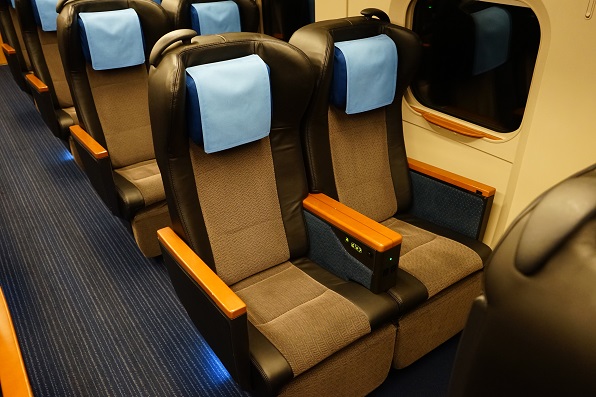 Green Seats on the Komachi Shinkansen.

Want to give Green Class a try for yourself? Order your Green Class Japan Rail Pass here.