Visit Shimoda with the JR Pass.

Located at the southern tip of the Izu-peninsula, Shimoda is the ultimate getaway from the busy metropolitan life of Tokyo. Loved by the locals for its beautiful beaches, quiet atmosphere and fresh seafood. Shimoda is well known by the Japanese but often overlooked by foreign visitors. Let us explain why you certainly should visit Shimoda!

A bit of background

The small port town of Shimoda, in the prefecture of Shizuoka can be found right on the southern tip of the Izu-peninsula. Only a 120 minute train ride away from Tokyo, Shimoda is a wonderful place to unwind and take a break from day-to-day city life.

Historically, Shimoda played a big role in opening Japan to the world. In 1854, US Commodore Perry and his fleet of Black Ships made a landing near Shimoda, which resulted in a treaty allowing for trade with different nations. At the time it was considered an embarrassment for the ruling Shogunate, these days it is celebrated as an important moment in the history between Japan and the outside world, namely the United States.

As a result, around town there are different points of interest that commemorate the connection between Japan and the United states. These include the picturesque Perry Road, the “Monument of Japan’s Opening to The World” and the Black Ship festival (Kurofune Matsuri), held every year in the middle of May.

Present day, Shimoda port is famous for its splendid beaches, relaxed way of life and fresh seafood. Tokyoites use it frequently as a weekend getaway, especially during the summer to cool off.

What to do in Shimoda 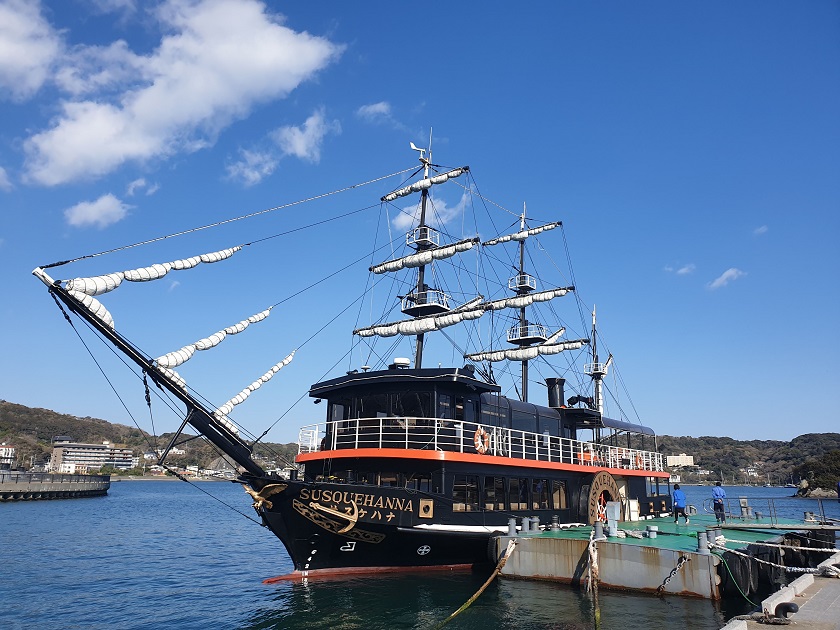 Take a cruise along the Shimoda bay on one of the black ship cruises that have been modelled after Commodore Perry’s ship. Let your hair loose in the sea breeze, enjoy the ocean views and feed the seabirds. During the cruise, a guide will explain various parts about the local history and sights.

You simply won’t find a better place to eat seafood in Japan, freshly caught every morning and served the same day in one of the local fish restaurants. According to the locals, the restaurants named Gorasaya, Jashumon and Izakaya Konagaya belong to the best. 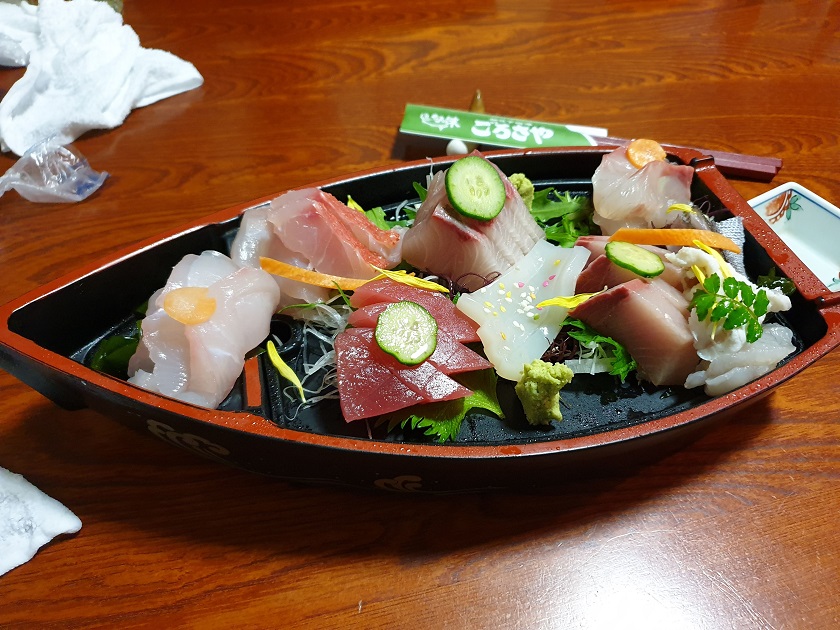 Go for a stroll around town and the harbour

Shimoda is great for a relaxed walk through town, meander through the small streets, browse the local craft shops, visit a temple and be inspired by the local landmarks telling tales of heroic fisherman, then walk along the harbour promenade to enjoy the fresh sea air and see the fishermen at their work. 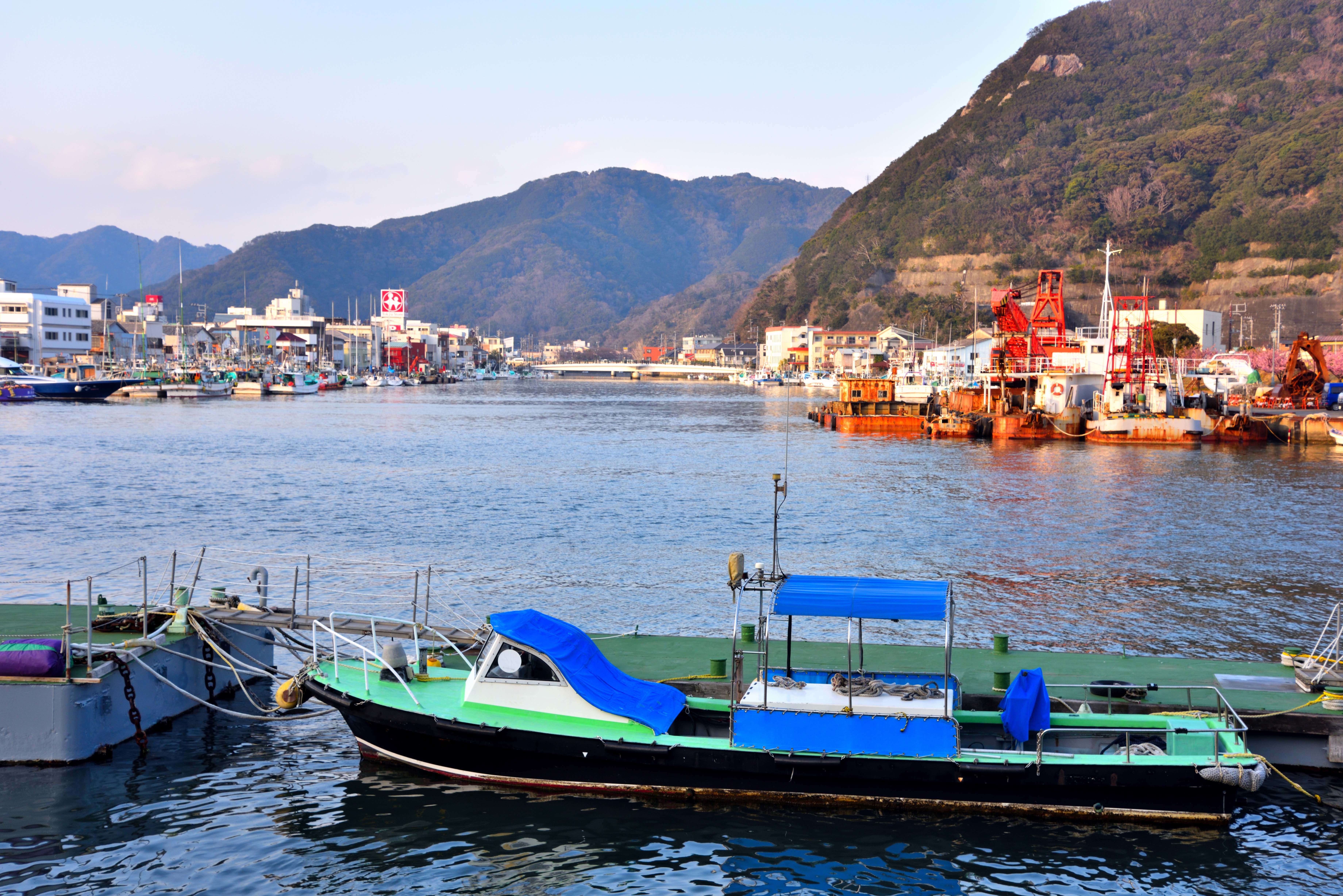 Sometimes referred to as Shiroyama park but more commonly known as Shimoda park, is an appealing park and build upon a hill overlooking Shimoda. It is home to the Monument to the Opening of US-Japan Diplomatic Relations built in 1957. We recommend to hike up in the afternoon for a beautiful sunset and good-looking set of panoramic pictures. 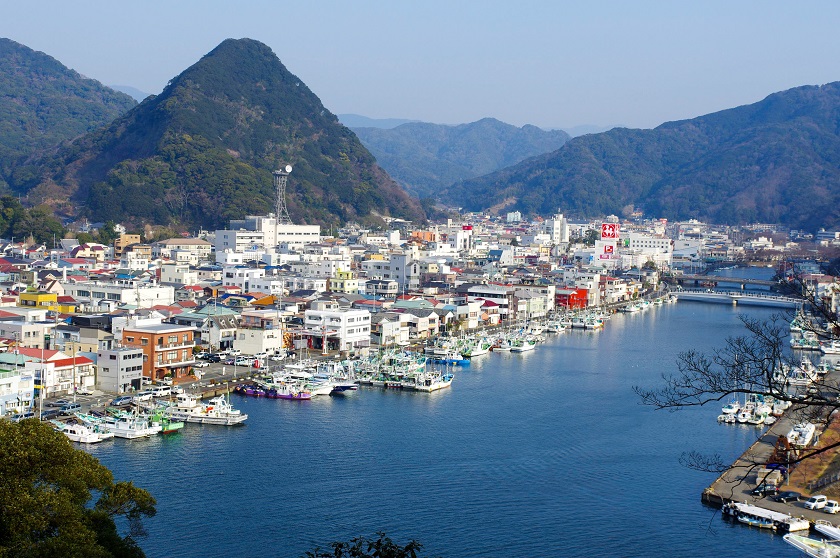 The Shimoda Ropeway was newly renovated in 2019 and bring you to the top of Mt. Nesugata. Get a stunning view of Shimoda port and surrounding bay. It’s a pleasant hike down from the top with additional great views. Of course the rope way can bring you down as well if you feel like taking a lazy day. 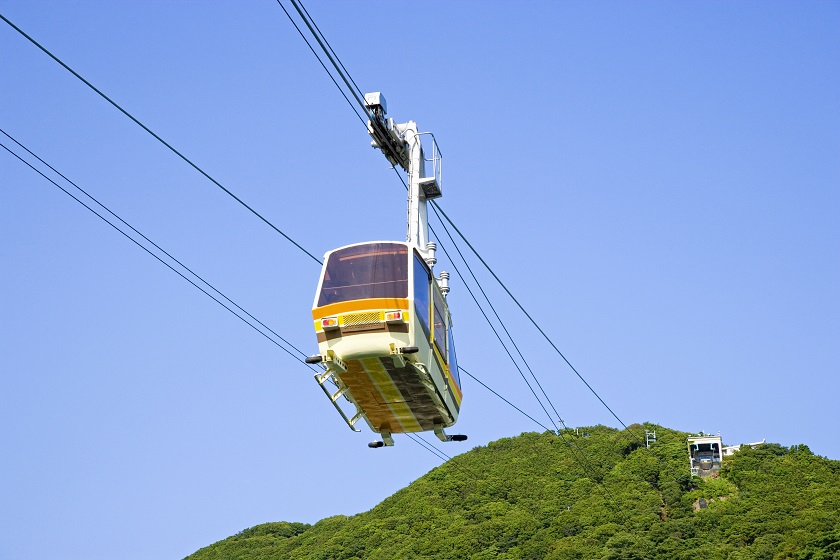 Unwind in an Onsen

There are plenty of good Onsen around Shimoda, some public but often private in a hotel or Ryokan. When looking for your accommodation check if come with their own private Onsen baths. There’s nothing better than to luxuriate in a hot Onsen after a long day exploring.

Some of Japan’s most beautiful beaches can be found around the Izu-Peninsula and close to Shimoda. These include the beaches of Shirahama, Kisama Ohama and Tatadohama, among the many others. Go for a swim, walk along the coastline or even enjoy some surfing. 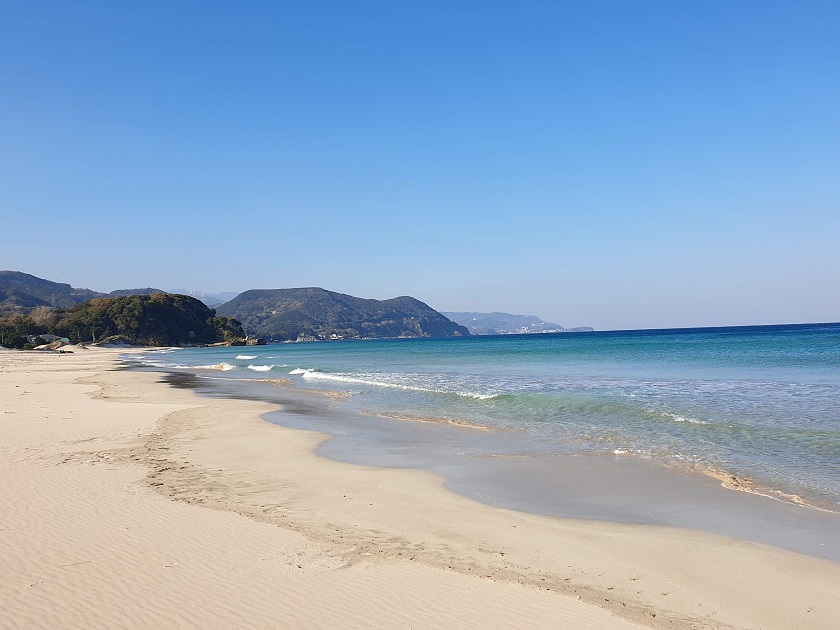 Make a side trip to Kawazu Seven Waterfalls

Known in Japanese as Kawazu Nanadaru, the Nanadaru is a series of 7 waterfalls in the Izu inland mountains, connected by a well maintained walking trail. The 7 waterfalls inspired a now famous poem in 1926, called the “Izu no Odoriko” (or the Izu Dancer), there are several statues along the train depicting the scenes and texts from the poem.

Like Izu itself, the Kawazu Seven Waterfalls are a hidden gem often overlooked. 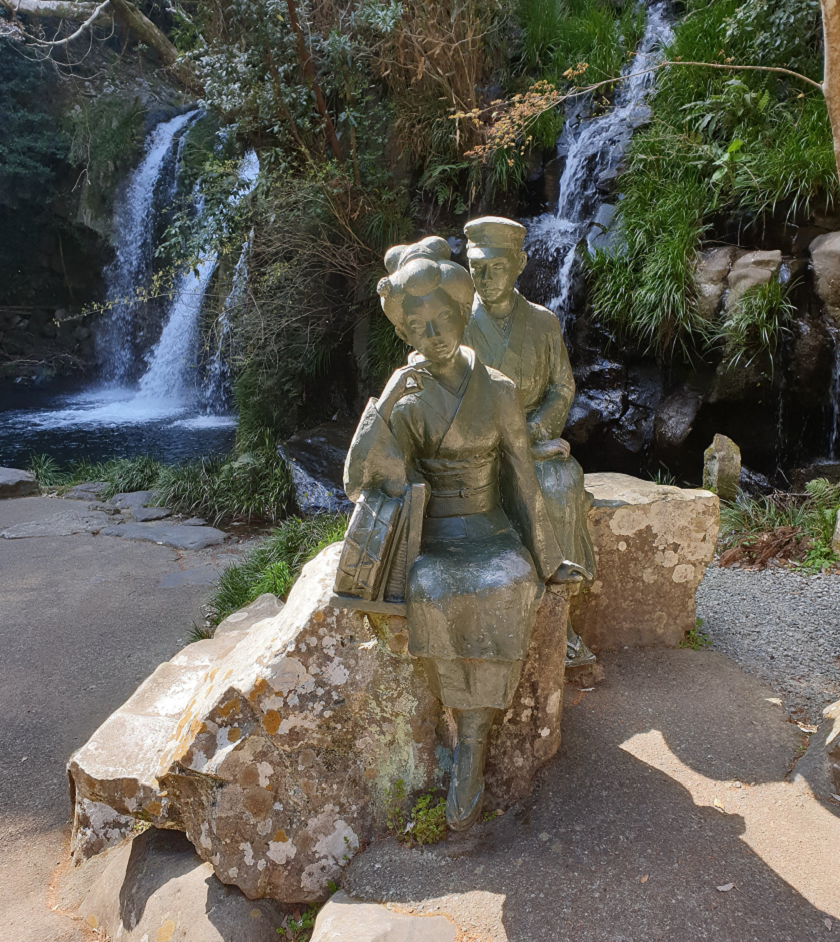 Statue of the Odoriko dancer

There are a limited number of buses per day that go directly to/from Shimoda to the Kawazu seven falls. A more frequent service runs from Kawazu station, which itself is only 2 stops away by local train from Izukyu-Shimoda station. We can’t recommend a visit to Kawazu Seven Waterfalls enough but you’ll need reserve some time getting there.

How to get to Shimoda using the JR Pass.

From Tokyo and Yokohama:
The Odoriko and Superview Odoriko ltd. express trains connect Tokyo and Yokohama directly to Shimoda. The train ride is roughly 2 hours and follows the Izu coastline, there are a good number of scenic views along the route, which by itself is worth travelling. 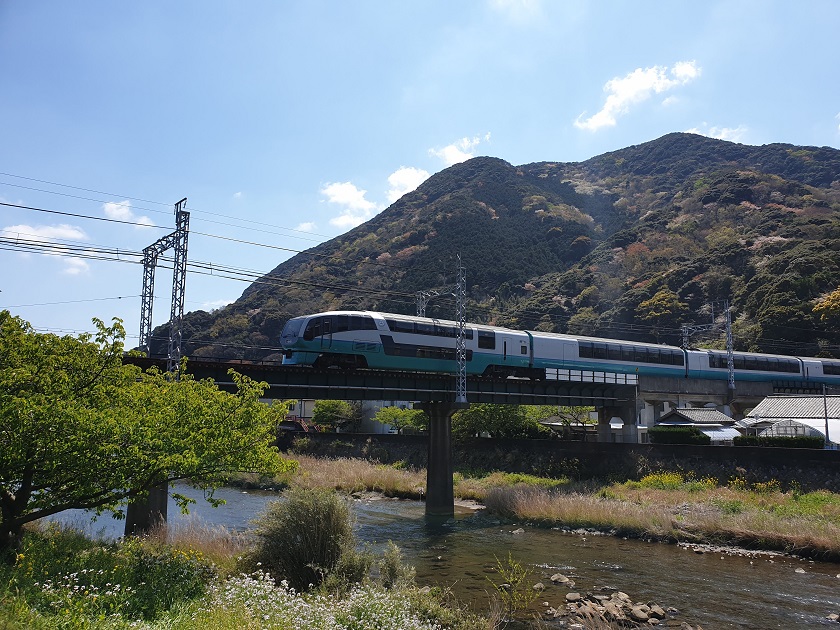 Coming from other directions: The first step is to make your way to Atami station. Atami is a direct stop on the Tokaido Shinkansen line and can be reached directly, coming from Tokyo, Nagoya, Kyoto or Osaka. At Atami, transfer to a local or Ltd. express train bound for Izukyu-Shimoda Station.

Unfortunately (or fortunately if you ask some), the route to Shimoda is not fully on the JR Network. This is because the last part of the ride between Ito station and Izukyu-Shimoda station is operated by a third sector railway company, the Izukyu railway.

This means that an extra fee with the Japan Rail Pass is necessary to reach to reach Shimoda. The (extra) fare from Ito to Izukyu-Shimoda is ¥1,620 using a local train or ¥ 2,130 using a ltd. express train. The extra fare can be paid on-board the train or upon arrival. While paying the extra fee may feel bad at first, it also means there will be a lot less tourists in Shimoda.

Japan has some of the biggest and best cities in the world. Find out what makes Japanese cities so special and which are the best to visit.

The SAPHIR ODORIKO train is a wonderful resort excursion train, travelling from Tokyo down the scenic coastline of the Izu Peninsula.